In war, words can be a weapon

In war, words can be a weapon 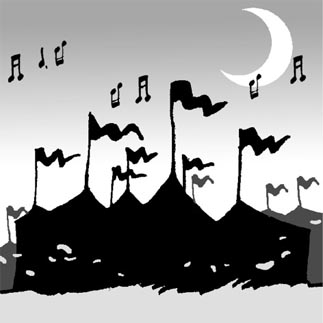 Xiang Yu of the Chu State was being chased by Liu Bang of Han, and was besieged at Gaixia. That night he could not fall asleep, and he heard a sad song being played. The soldiers of Han who surrounded him were singing about Chu. Xiang Yu lamented, saying, “Has Han already occupied Chu?” His forces lost morale and disbanded. That is the origin of the Chinese expression “si mian chu ge,” which literally means “Chu songs on four sides” and has come to mean “surrounded by enemies.”

In modern conflict, psychological warfare is absolutely necessary. Radio broadcasts are a good example. During the Pacific War, G.I.s were bewitched by female voices on the Japanese radio station NHK. These faceless lovers were dubbed “Tokyo Rose.” The most famous Tokyo Rose was a U.S. citizen, and after the war she was charged with treason. During the Vietnam War, a “Hanoi Hannah” played a similar role. A woman began her broadcasts introducing herself as Thu Huong, which means “the fragrance of autumn” in Vietnamese, and she softened G.I.s’ hearts. Her sweet voice whispering, “You’re going to have a meaningless death in someone else’s country” was more powerful than gunfire. Her real name was Trinh Thi Ngo, and she was awarded a medal after the war was over.

During the Korean War propaganda leaflets were the most popular means of psychological warfare. According to the memoirs of General Paik Sun-yup, the United Nations forces dropped a total of 2.5 billion leaflets of some 1,000 varieties. Most were the size of an ordinary postcard. Together, they could cover the whole Korean Peninsula 20 times. One featured, for instance, a photo of a ball of cooked rice and a grilled fish with the phrase, “Join the UN forces to eat well and have a comfortable life.” Others read, “The Chinese Army has good weapons while the North Korean Army only gets bad ones,” in an attempt to drive a wedge between the allies. Some read, “If you surrender we will let you live.”

Leaflets were used even after the truce. They served as silent paper bombs during the Cold War era. Mostly they promoted each side’s regime. In the mid-1980s South Korea dropped photos of the actress Won Mi-gyeong over the North, with the promise that every defector would receive 807.7 kilograms (1,780 pounds) of gold. North Korean flyers showed a dancing woman and said that a private would be given 111 million won (worth around $90,000 today) and a general 333 million won.

Words can be used in psychological warfare. In the Chinese classic “Romance of the Three Kingdoms,” generals often swear in order to make opponents lose their temper. In the Korean movie “Once Upon a Time on the Battlefield” by Lee Jun-ik, generals of Silla and Baekje engage in a war of swears. Loudspeakers are modern tools for this maneuver. They deliver propaganda to enemies 10 kilometers (six miles) away.

The South Korean government announced the resumption of psychological war in response to North Korea’s attack on the South Korean vessel Cheonan. North Korea reacted with threats. In the chapter “Contest of the Armies” in “The Art of War” by Sun Tzu, the author advises that an army should deprive the enemy of its morale and a general of his spirit. This is what the South will attempt to accomplish through psychological warfare against the North.