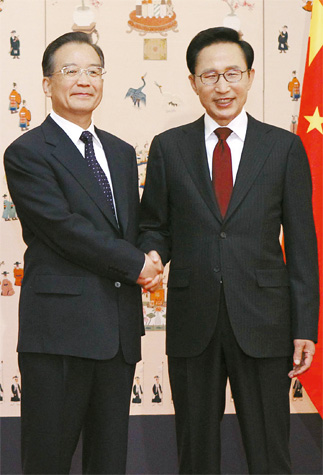 China will not protect the culprit behind the sinking of a South Korean warship, Chinese Premier Wen Jiabao told President Lee Myung-bak yesterday during their summit at the Blue House, signaling a delicate change in Beijing’s position.

“The Chinese government will value the outcome of the international probe and the international community’s reaction to it and determine right and wrong to decide its position objectively and fairly,” Wen was quoted as telling Lee by Blue House spokesman Lee Dong-kwan.

“Following that decision, we will shield no one.”

Wen also told Lee that China opposes and condemns any action that disturbs the peace and stability of the Korean Peninsula, according to the spokesman.

According to the spokesman, Lee provided a detailed explanation of the international probe’s conclusion that a North Korean torpedo attack was responsible for sinking the Cheonan in March, and said that Seoul’s harsh countermeasures were meant to teach Pyongyang a lesson that it won’t be rewarded for provocation.

Lee strongly urged China to play a role in persuading the North to admit its wrongdoings, the spokesman said.

“We hope the South Korean government will handle the situation properly and we will closely consult with the South,” Wen was quoted as saying by the Blue House spokesman.

The Blue House made the two leaders’ remarks public after coordinating the announcement with Beijing.

Wen arrived in Seoul yesterday and talked with Lee for nearly an hour and 40 minutes, far longer than their scheduled 30-minute meeting.

Only top foreign affairs and security officials of both nations accompanied the two leaders during the discussion that focused on the Cheonan fallout.

The summit came at a critical juncture as China, the North’s communist ally, has remained on the fence on the question of holding Pyongyang responsible for sinking the warship.

Since formally identifying North Korea as the culprit behind the submarine infiltration and torpedo attack that split the ship in two and killed 46 sailors, Seoul has taken various measures to punish Pyongyang, including a plan to bring the matter to the UN Security Council.

The international community has increasingly joined Seoul’s campaign to punish Pyongyang for the attack, but Beijing’s lukewarm attitude frustrated the Blue House.

On May 5, during his trip to China, Kim told Hu that North Korea had nothing to with the Cheonan’s sinking, the source said.

“The Chinese leadership was baffled to find out later that Kim’s claim was not true when the South Korean government announced the results of its probe [on May 20],” he said.

“If China changes its position and no longer shields North Korea, it’s probably because it felt betrayed by the North.”

Shortly before the Lee-Wen meeting began, the Blue House emphasized the importance of persuading the international community - especially China - to punish North Korea for its latest provocation.

“We will engage in a diplomatic race through [yesterday’s] South Korea-China summit, the South Korea-Japan-China summit over the weekend and the upcoming Asia Security Summit in Singapore on June 4 and 5.”

Park also said the recent visit by U.S. Secretary of State Hillary Clinton and consultation with Russia, as well as an invitation to China to send their own experts to verify the South’s conclusions about the Cheonan disaster, are a part of Seoul’s diplomacy.

“Let me stress this again. Our goal is not an inter-Korean confrontation, isolation of the North or collapse of the North,” Park said.

“The primary goal is to hold the North accountable for its wrongdoing to prevent recurrence of a similar incident.

“And our ultimate goal is persuading North Korea to give up its nuclear programs and establishing peace on the Korean Peninsula.”