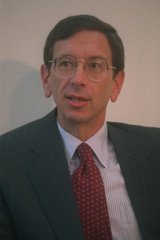 The U.S. government has nominated Robert Einhorn, an expert in nonproliferation issues, as its new coordinator for implementing UN Security Council sanctions against North Korea, diplomatic sources in Seoul said on Thursday.

Einhorn is currently the special adviser to U.S. Secretary of State Hillary Clinton for nonproliferation and arms control, and a source here said Einhorn is one of Washington’s leading experts in Korean Peninsula and North Korean nuclear issues.

The sources said the United States is looking to streamline the process by which it implements sanctions, as it prepares to seek a UN resolution that addresses the sinking of the South Korean warship Cheonan. Last week, a multinational team of investigators concluded that North Korea attacked the 1,200-ton corvette with a torpedo on March 26.

“The U.S. administration was seeking more efficient management of implementation of sanctions, which had been divided between the State and the Treasury departments,” the source said. “Philip Goldberg, the assistant state secretary at the Bureau of Intelligence and Research, had been doubling as the implementation coordinator, but Einhorn is poised to take over.

“The U.S. government also tried to strengthen its sanctions system after the second North Korean nuclear test last year, when Goldberg was named the coordinator,” the source said. Goldberg was appointed to his Bureau of Intelligence and Research post in February.

Another source said Einhorn’s nomination is also part of the U.S. government’s efforts to follow up on President Barack Obama’s order to review “existing authorities and policies” on North Korea. Soon after South Korean President Lee Myung-bak unveiled Seoul’s countermeasures against Pyongyang Monday, the White House expressed its support and said in a statement, “This review is aimed at ensuring that we have adequate measures in place and to identify areas where adjustments would be appropriate.”

According to the State Department, Einhorn spent 29 years at the department and served as a senior adviser at the Center for Strategic and International Studies from 2001 to 2009. He held arms control and nonproliferation positions at the U.S. Arms Control and Disarmament Agency, and from 1999 to 2001 he was the assistant state secretary for nonproliferation.

“Aside from his knowledge of North Korean nuclear issues, Einhorn is tight with Gary Samore, the weapons of mass destruction coordinator at the White House, and other nonproliferation officials in the Obama administration,” another source in Seoul said. “Einhorn should be able to provide leadership in his new role.

“And since he’s also been dealing with financial sanctions on Iran as the special adviser at the State Department, Einhorn is a great fit to manage financial embargoes against North Korea.”

Another diplomatic source said the Obama administration needed to tighten its sanctions regime. The source said when North Korean overseas accounts were closed off by U.S. sanctions, they simply changed the name of the individual or the company which had opened the account and resumed transactions. The sanctions were aimed at banning transactions by companies or individuals suspected of involvement in the North’s weapons of mass destruction programs.

“U.S. officials have taken note of such [name-changing] practices and they’re preparing measures to eliminate them,” the source said.

U.S. officials are also continuing to press China to join them in punishing North Korea. In an interview with National Public Radio yesterday, Korean time, Kurt Campbell, the assistant secretary of state for East Asian and Pacific Affairs, said that because China is cooperating with the United States about nuclear issues in Iran, he hopes it will do the same in dealing with the Cheonan case.

In another related move, Obama and Japanese Prime Minister Yukio Hatoyama condemned the Cheonan attack in a phone conversation and pledged cooperation with South Korea. Japanese Chief Cabinet Secretary Hirofumi Hirano said Japan will lower the limit on the amount of undeclared cash that can be carried into North Korea to 100,000 yen ($1,097) from the current 300,000 yen, as part of Japan’s toughened sanctions.