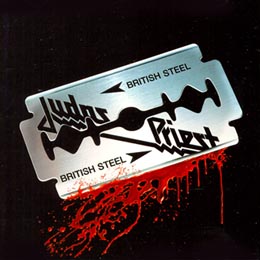 “British Steel,” the seminal heavy metal album by the British (where else?) band Judas Priest, was the first vinyl record I ever purchased 17 years ago. At 4,500 won ($3.80 today), it was probably the best buy of my life. Today, I wouldn’t sell it for 100 times that price.

The record that many critics and musicians agree defined heavy metal turned 30 this year, and the anniversary package includes a remastered CD and a DVD of Judas Priest’s Florida performance last year, when the band played the entire album live as part of their U.S. tour. It’s a present for Priest fans.

Three decades later, the songs rock all the same: from the groovy “Metal Gods” (what Judas Priest is to many fans) to the anthem “Living After Midnight” and “The Rage,” likely the last bluesy-metal piece the band has done.

Listening to the sleek CD brought back memories, though nothing beats the nostalgic crackles of vinyl. At least on the CD, the sound of cutlery trays smashing into the marble floor at the tail end of “Metal Gods” is clearer.