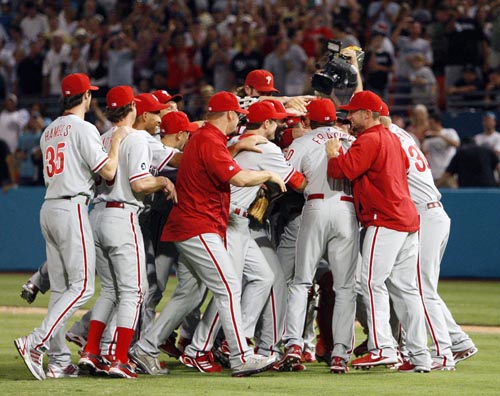 MIAMI - Philadelphia Phillies’ ace Roy Halladay pitched the 20th perfect game in major league history, delivering the marquee performance of his All-Star career in a 1-0 win over the Florida Marlins on Saturday.

It was the second perfect game in the majors this month - unheralded Dallas Braden did it for Oakland against Tampa Bay on May 9 - and the first season in the modern era to see a pair of perfect games.

“We felt like we got in a groove early and about the fifth or the sixth I was just following Chooch,” he said. “I can’t say enough about the job he did today. Mixed pitches. For me it was really a no-brainer.”

Halladay struck out 11, then got pinch-hitter Ronny Paulino to ground out to end it, and was cheered by a crowd of 25,086 throughout much of the night.

Florida’s Mike Lamb led off the ninth with a long fly ball, but Shane Victorino had plenty of time to backtrack in the super-spacious outfield at Sun Life Stadium and catch it for the first out.

Wes Helms then struck out, and the crowd began to roar.

From there, it was all up to Paulino, who fouled the first pitch into the seats along the first-base side, took ball one, swung and missed for strike two, and at 9:23 p.m., hit a groundball.

Backup third baseman Juan Castro ranged to his left to get it and threw across to first baseman Ryan Howard, who caught the ball and jumped in the air before joining the mob congratulating Halladay.

“Early in my bullpen I was hitting spots more than I have been. I felt like I just carried that out there,” Halladay said.

While there were a couple of good plays to help him - shortstop Wilson Valdez went deep into the hole for a grounder, Castro went to his knees for another - Halladay didn’t need any great defensive work in this gem.

The 33-year-old known as Doc was a veritable one-man show. Always stoic on the mound, Halladay (7-3) broke into a big smile as his teammates rushed in to congratulate him.

Halladay has long been one of the game’s best, and the former American League Cy Young Award winner was the centerpiece of a trade that brought him from Toronto to the two-time National League champions in the offseason.

He was within one out of a no-hitter on Sept. 27, 1998, in just his second major league start, pitching for the Blue Jays against Detroit. Pinch-hitter Bobby Higginson ended that on the first pitch he saw, hitting a solo home run.

This was the Phillies’ second perfect game, with Jim Bunning having thrown one in 1964.