The perils of the part-time lecturer

The perils of the part-time lecturer 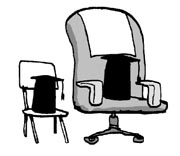 There are about 85,000 of them nationwide. They are in charge of 55 percent of the lectures at four-year colleges in Korea, but they have annual salaries that amount to between just 4 million won and 5 million won ($3,350 and $4,185). They are not provided with basic social insurance coverage. There are no offices or staff lounges for them. Their title is “temporary teaching staff,” but people call them part-time lecturers.

Jun-yeong, the leading man in the film “Marriage is a Crazy Thing,” is also a part-time lecturer. Therefore, Yeon-hee, a realist, does not marry him. But she continues her affair with him because she thinks she can cheat on her husband, a medical doctor, forever.

Hong Sang-soo’s “The Power of Kangwon Province,” depicts the sorrow of a part-time lecturer in a more realistic way. Though he despises Professor Kim, Sang-kwon visits the professor’s house with a bottle of Johnnie Walker Blue Label, because he is a part-time lecturer and he wants to be a tenured professor.

But reality is more severe than the situation depicted on film. The lives of part-time lecturers started to crumble in 1977, when they were deprived of the status of “teaching staff” following a policy on financial stabilization of educational institutes.

In addition to receiving poor pay, part-time lecturers have no job security. According to the Irregular Worker Protection Law, which was enacted in July 2007, a “part-time lecturer” is not part of the list of jobs that should be switched to permanent positions after two years of employment because they are regarded as a special group.

According to the part-time lecturers’ union, six part-time lecturers have committed suicide since 2000, accusing universities of corruption in the employment of teaching staff and flaws in their employment system. In February 2008, a female lecturer in her mid-40s even flew to Austin, Texas, where she got her doctorate, to commit suicide. The fact that she would take her own life, leaving her 16-year-old daughter behind, gave us a shock. Another lecturer left a will, in which he said, “Something else, not research accomplishments or lecture experience, has a vital influence on the employment of teaching staff. I hope that no one else will ever be in the same position as I again.”

Sadly, yet another part-time lecturer took his own life in Gwangju on Tuesday. Mr. Seo, who was in his mid-40s, left a letter that said, in part: “I was asked to pay 60 million won by a university in South Jeolla two years ago and 100 million won by a university in Gyeonggi two months ago if I wanted to become a full-time professor.” He also said he had written numerous papers for a professor at Chosun University in Gwangju without credit. The letter was addressed to President Lee Myung-bak. Some 85,000 lecturers nationwide now await a reply from the president.