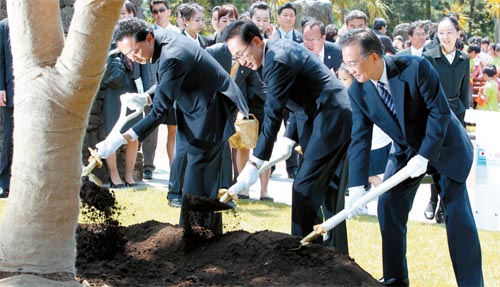 Wen said the most urgent task was to defuse escalated tensions on the peninsula. “We need to dispel the impact of the Cheonan incident, gradually ease tension and especially avoid a clash,” Wen said yesterday at a joint media conference after the summit.

And while the Chinese premier didn’t accuse North Korea of the tragedy or promise to bring the North to account at the United Nations, South Korean officials said they saw signs of change in Beijing’s position after pressure from Seoul, Tokyo and Washington.

In a statement after the summit, Lee called the Cheonan’s sinking “an extremely important task of the international community,” and said, “I believe we must take firm steps to address this issue, and I think the Japanese and Chinese leaders are on the same page with me.”

Hatoyama said the three leaders shared an understanding that the Cheonan’s sinking is a serious issue that affects the peace and stability of Northeast Asia: “It was confirmed that the three countries will closely cooperate in the future over this issue,”

“The Japanese and Chinese leaders highly valued the international probe and reactions of the international community,” Lee said, reading a joint statement. “The three leaders agreed to continuously cooperate to maintain peace and stability in the region and properly handle the Cheonan issue.”

Lee Dong-kwan, a Blue House spokesman, said President Lee made clear that South Korea’s actions against North Korea were not meant to start a war. “We are not afraid of a war, but we do not want one,” the president was quoted as saying at the summit.

The spokesman also said Wen stressed that China will fulfill its international responsibility. In his meeting with South Korean Prime Minister Chun Un-chan on Saturday, Wen said that China was a responsible nation which insists on justice and is seriously considering the findings of the multinational investigation.

On Friday, after a bilateral meeting with President Lee, Wen said China would not shield the party responsible for the Cheonan’s sinking.

“We believe this is progress,” said Blue House spokesman Lee. “China took a half-step forward last time, and today, it made one full step forward.”

He noted that it was a significant development that China agreed to include the Cheonan issue in the joint media statement, calling it a change from China’s past attitude on handling all North Korea issues sensitively.

“This is an issue that is incredibly difficult to reach an agreement on,” said a Blue House official. “But the leaders have said they were aboard a single ship, and that summarizes the significance.”

The Blue House has said that persuading Beijing to help in the aftermath of the sinking was a key goal of Lee’s diplomacy. The Foreign Ministry will bring the attack to the United Nations Security Council possibly this week, and a binding resolution to impose sanctions on Pyongyang requires the unanimous approval of five veto-wielding permanent members: the United States, China, Britain, France and Russia.

In a separate bilateral meeting, Japan pledged its full support for South Korea’s handling of the latest North Korean provocation. “Japan will take the lead in international cooperation and support Korea’s position at the UN Security Council,” Hatoyama was quoted as saying at a bilateral meeting, which took place on Saturday, by Blue House spokesman Lee Dong-kwan.

Ahead of his trip to Jeju on Saturday, Hatoyama visited the National Cemetery of Korea in Daejeon and paid respects at the graves of the 46 Cheonan sailors who were killed in the March sinking.

Before the Saturday trilateral session opened, Hatoyama proposed the leaders pay a silent tribute to the dead sailors. “Let’s do so if Premier Wen agrees,” Lee replied, and the Chinese leader accepted. The three leaders dropped their heads for a 10-second silent prayer and Lee thanked Hatoyama and Wen in Japanese and Chinese.The two-day summit focused on trilateral economic ties and future visions on Saturday. Yesterday’s session was devoted to security affairs, and the Cheonan’s sinking was the key topic along with North Korea’s nuclear arms programs and the resumption of the six-party nuclear talks as a long-term goal.