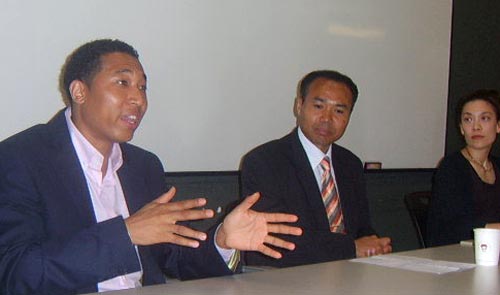 From left, Chan-wook Yang, president of MACK Foundation in Korea, James Kang-McCann, founder of the Amerasian Christian Academy, and Linda Kwon, a MACK board member, speak about life as multiethnic Koreans at a forum at the TOZ Cafe in Sinchon on Saturday.


The first in a series of forums that will explore the lives of multicultural Koreans was held Saturday, sponsored by the Movement for the Advancement of Cultural Diversity of Koreans Foundation in Korea.

In an address called “Living in Korea with Mixed Heritage,” James Kang-McCann told a group of about 25 people of various ethnicities, including a handful of university researchers, that Korea has come a long way since he was picked on in elementary school in the 1970s.

Today, an occasional cabdriver might mistake him for a migrant worker and speak down to him, but most Koreans respect his status as an educator and American, said Kang-McCann, the founder of the Amerasian Christian Academy in Dongducheon, whose father is African-American and mother is Korean.

Kang-McCann said lower-income foreign or mixed-race children whose parents can’t afford private education in hagwon face special challenges, and schools should develop programs that address their needs. He added that although the Korean government does not recognize his school as preparing students to enter Korean universities, many parents opt for the ACA to keep their children from being bullied. “Many of the students who come to our school base their fate on our school system,” he said.

MACK supports the education of multicultural children, sponsors a social networking group for mixed-race Koreans and tries to help Koreans adapt to the country’s increasing cultural diversity. Its next forum will be held in the fall.