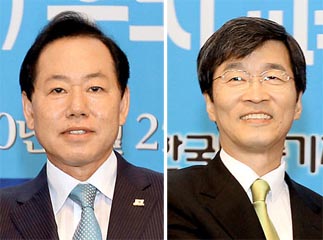 You would expect education-obsessed Korea to be right on top of the race for Seoul’s top education post, but this year, many voters don’t even know who is running.

In a survey of 1,000 eligible voters in Seoul conducted by broadcasters KBS, MBC and SBS this month, 60.5 percent said they don’t know who is running for superintendent of the Seoul Metropolitan Office of Education. The highest approval rating for a candidate in the survey was a mere 7 percent.

And it’s not just in Seoul; public indifference to who runs the schools is apparent in other areas in Korea. The broadcasters’ poll found that more than half of those surveyed in eight of 16 areas said they aren’t familiar with the candidates for education superintendent in their place of residence.

This year there are seven candidates for superintendent of education in Seoul. The main campaign issues are their stances on the Korean Teachers and Education Workers’ Union and the educational policies of President Lee Myung-bak’s administration.

Enjoying a small lead in local polls is conservative Lee Won-hee, the former head of the Korean Federation of Teachers’ Association. While pledging to eliminate corruption in the education sector and reduce dependence on private education, Lee has stressed his disdain for the political activities of the Korean Teachers and Education Workers’ Union, saying its members clearly broke the law by engaging in political activities, and supported the Education Ministry’s dismissal of 134 unionized public school teachers. He also vowed that he will cut the unqualified, corrupt bottom 10 percent of teachers and push for more gifted schools and self-governing private high schools.

The sole liberal candidate, Kwak No-hyun, a presidential advisor under Roh Moo-hyun and a professor at Korea National Open University, is Lee’s main rival. Kwak’s election promises include providing healthy, free meals for students and reducing the student-teacher ratio per classroom to 25-1. He also vowed to make the evaluation system for teachers more transparent.

Unlike Lee, Kwak said he will reduce the number of self-governing private high schools. They also differ on the teachers’ dismissal; Kwak said it wasn’t fair for the Education Ministry to have decided the penalty for their involvement in political activities.

While the six other candidates’ campaign color is blue, to identify themselves with the ruling Grand National Party, Kwak is using green, for the main opposition Democratic Party. Unlike mayoral and gubernatorial candidates, education candidates have to campaign independently, without support from political parties.

Closely following Lee and Kwak in the polls is Nam Seung-hee, whose campaign catchphrase has been “mother-like” superintendent. Nam, a former education planning director of Seoul, has vowed to stop corruption in the education sector and reduce the dependence on private education.

Former head of Deoksung Girl’s Middle School Kim Young-sook is another female candidate for the position. Kim has promised to invigorate after-school programs and activities to reduce private education costs.

Kim Sung-dong, former head of the Korea Institute of Curriculum and Evaluation, has promised more hours of physical education and English classes for first-grade students.

The two candidates at the bottom of the polls are Kwon Young-joon, professor at Kyung Hee University, who is vowing to stop student-on-student violence, and Lee Sang-jin, a member of Seoul city’s education committee, who is promising to provide more opportunities for children from low-income families.