Kwak out after friendly match

Kwak out after friendly match 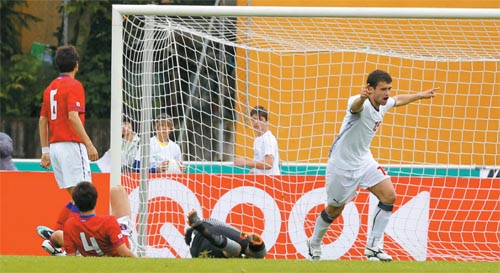 Belarussian midfielder Sergei Kislyak celebrates after scoring in the 52nd minute of the friendly match between Korea and Belarus. By Kim Min-gyu

It wasn’t just a loss, but an unexpected blow.

South Korea’s 0-1 defeat by 82nd-ranked Belarus in Kufstein, Austria, late Sunday night cost the national team face - Belarus played without some key members - and an important defender, Kwak Tae-hwi, who went down with a knee injury in the match.

And with the big man gone, manager Huh Jung-moo and his coaching staff yesterday decided on Kang Min-soo of Suwon Bluewings to replace him. Kang, who was recently cut from the 30-man preliminary roster, will in all likeliness make the final cut as one of four center defenders when the national team coaching staff announces their 23-man final roster by 4 p.m. today.

Kwak collided with a Belarussian player while battling for the ball, and buckled his left knee on the way down, tearing a ligament. After being taken to a nearby hospital for an MRI, he was diagnosed with a medial collateral ligament tear and is expected to be out for at least four weeks. 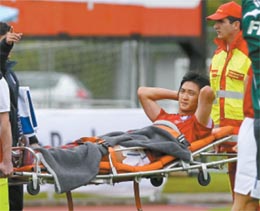 Defender Kwak Tae-hwi gets carried out on a stretcher after suffering an injury to his left knee. By Kim Min-gyu

Huh had been looking at the 185-centimeter (6 feet, 1 inch) Kwak to provided valuable height in the defensive zone when facing off against Greece. Not only that, the tall defender boasts four goals in 14 appearances for the national team.

“Huh was disappointed with Kwak’s loss to injury. He’s going to call on one of the players who were cut from the preliminary 30-man roster,” a Korea Football Association official said.

With Greek manager Otto Rehhagel looking on from the stands, the friendly against Belarus was supposed to be just a tune-up to prepare for Korea’s 2010 World Cup opening match against Greece.

It didn’t turn out the way Korean football fans had expected. The team struggled to mount any quality opportunities, and couldn’t capitalize on its set piece plays against Belarus, which relied on its defense and counterattacks to frustrate the Korean players.

“I didn’t expect a smooth game, but not much worked in our favor today,” said Huh. “Before the start of the game, I told my players to get accustomed to the European style of play. It was an opportunity to experience a game against taller and stronger European players. We’ll have to continue to prepare for our shortcomings so that we can do better at the World Cup.”

The consensus of the Korean players such as Yeom Ki-hun, Cha Du-ri and Cho Yong-hyung in post-match interviews was that the heavy rainfall in the early stages of the match, along with the high altitude, were the biggest reasons for their struggle against the Belarussian squad.

“We failed to show up today. This game is not indicative of our team,” said captain Park Ji-sung. “We struggled on both sides of the ball and we had some problems communicating.”

But Park said the game wasn’t a total loss. He believes the match will help the team in the long run as it prepares for the 2010 South Africa World Cup.

“I think it’s a good thing that we experienced the problems today, instead of at a later point,” he said. “We’ll recover from the loss through training. Today’s loss won’t be a big problem for the team as we prepare for the World Cup. It will actually serve as a good opportunity.”

The Korean players were also quick to point out that Belarus, missing some top players including midfielder Alyaksandr Hleb of VfB Stuttgart from its lineup, had to play under the same conditions.

“If we had our top men who play professionally in Germany and Italy, we could have played better,” said Belarus manager Bernd Stange in a post-match interview. “Korea did not look sharp today. The World Cup will be a tougher test for the team. If they continue to prepare in the next 10 days, they can improve.”

Korea will play its final friendly match against Spain on Friday in Innsbruck, Austria.