Nexen’s Koh takes aim for Rookie of the Year

Nexen’s Koh takes aim for Rookie of the Year 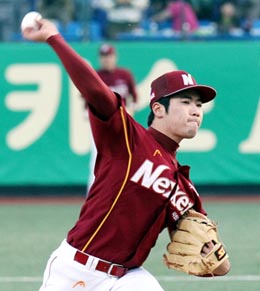 It’s still early, but the Nexen Heroes have a good shot at adding another Rookie of the Year honor to their trophy case.

Pitcher Koh Won-june has been throwing well beyond his 20 years in his first season in the pros.

Against the LG Twins on May 30, Koh gave up three hits and no runs in eight innings of work. Although the Heroes failed to put up a single run and lost the game 1-0 in the 11th inning, Koh’s outing was impressive. He has now provided the Heroes with four consecutive games in which he has given up three runs or less in six or more innings of work. He boasts an ERA of 0.99 in the same stretch.

When the Nexen Heroes were the Hyundai Unicorns, the team regularly produced Rookie of the Year-winning pitchers. Kim Soo-kyung won the team’s first title in 1998 and Cho Yong-joon, Lee Dong-hak and Oh Jae-young followed between 2002 and 2004. Current Nexen manager Kim Si-jin’s tenure with the club stretches back to the 1998 season when he was the pitching coach.

Koh boasts all the tools that top pitchers need. His fastball clocks in at more than 150 kilometers (93 miles) per hour, and he has good command of his pitches. Koh’s repertoire has a good mix of breaking balls, including slider, changeup, sinker and a curve pitch with a hard break which he often relies on to get out of jams. Many baseball experts are comparing Koh to Hanwha Eagles ace Ryu Hyun-jin.

Part of Koh’s stellar progress can be attributed to Kim and pitching coach Jung Min-tae. Kim has been patient with the rookie and Jung taught him the curveball.

“Regardless of his stats, I will continue to give him opportunities to start,” Kim has stated on numerous occasions.

In order for Koh to win the top rookie honor, he must produce solid numbers. Hong Sang-sam of the Doosan Bears was one of the candidates for the award last season, boasting a record of nine wins, six losses and a 5.23 ERA. For Koh to make a strong case, he must put up double-digit wins and lower his ERA. Koh currently has two wins and two losses with a 2.16 ERA and 43 strikeouts in 41 and two thirds of an inning.

Koh’s biggest rivals are Yang Eui-ji of the Doosan Bears and Oh Ji-hwan of the LG Twins. The odds are on Koh’s side. Since the 2000 season, eight of the 10 Rookie of the Year titles went to pitchers, with the only exceptions being Kim Tae-kyun in 2001 and Choi Hyung-woo in 2008.