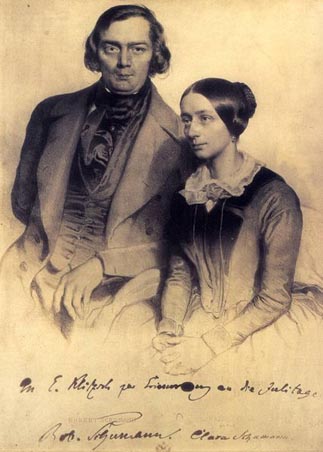 Robert Schumann, left, was born 200 years ago in 1810. His wife Clara, right, eventually became a distinguished pianist and composer in her own right. Provided by Stageone

As you may have noticed from the unusual flood of concerts and recordings in recent months, the world is celebrating the bicentenary of Frederic Chopin, the Polish-French master of Romantic music.

But were you also aware that Robert Schumann was born this year, too? Although a smaller portion of the public may be able to say “yes,” few know about the German composer’s 200th birthday. To celebrate this historic event, record labels have been churning out collections of Schumann’s compositions at reasonable prices and there is a yearlong chamber music festival under way.

The Schumann collection contains such works as Piano Concerto in A Minor, Op. 54, which he played with the Wien Philharmonic Orchestra, as well as Fantasie in C Major, Op. 17; Sonata No. 1 in F-Sharp Minor, Op. 11; and Carnival, Op. 9. 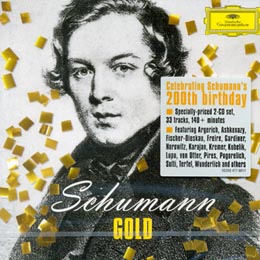 “Schumann Gold,” a collection of Schumann compositions released in celebration of the 200th year of his birth. Provided by Universal Music

Other music labels are also releasing collections to honor the composers.

EMI unveiled a Schumann collection as part of its “beloved artist” series in the middle of last month.

Deutsche Grammophon in April released “Schumann Gold,” which the recording label says is “an essential collection of favorites, encompassing all the major musical genres he explored.” The works range from symphonies to piano quintets, concertos and lieder.

In the local classical music scene, the Schumann Chamber Music Festival began in May and continues through October. It involves the participation of more than two dozen domestic chamber music experts including Bae Ik-hwan, a violinist who is now on the faculty of Indiana University’s Jacobs School of Music.

The first program of the festival was presented on May 11 at Hoam Art Hall in downtown Seoul with the title “1842.” That was the year Schumann composed the Three String Quartet, Op. 41; The Piano Quintet, Op. 44; and a piano trio which in its final form became Fantasiestucke, Op. 88. 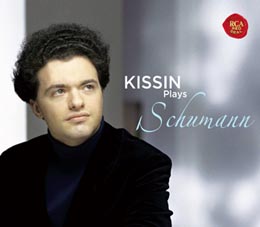 The next concert, held on May 20, centered around Liszt’s showy arrangement of Schumann’s “Widmung Dedication.”

The next three concerts will be held at the Chamber Hall at the Sejong Center for the Performing Arts in Gwanghwamun. The first concert is “Marchenbilder (Fairy Tales),” which is scheduled for Aug. 31, followed by “Romance” on Sept. 10 and “Schumann’s Lover, Clara” on Oct. 5.

Despite having different origins and backgrounds, Schumann and Chopin had a history. Schumann, a composer, aesthete and influential music critic (as publisher of “Die Neue Zeitschrift fur Musik” or “New Journal for Music”), led a campaign to promote contemporary composers including Chopin. Schumann was also the one who said publicly that Johannes Brahms was a musical genius.

Schumann died in middle age at a mental institution two years after a failed suicide attempt. After her husband’s death, Clara Schumann continued her musical career and became a distinguished concert pianist and composer in her own right.