[Viewpoint] There is no Group of 2

[Viewpoint] There is no Group of 2 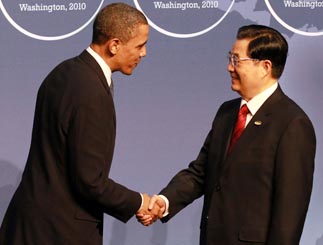 “What do you think of the term G-2?” a young Chinese government official asked at the end of a lecture at the Human Resources Development Institute of Kumho Asiana Group in Yongin, Gyeonggi, last Wednesday.

About 150 Chinese government officials in their 30s listened to the lecture on the development of the Korea-China relationship. The lecture was a part of a study program on Korean culture for the 2010 Chinese youth delegation organized by the Korea Foundation.

The point of the question seems clear. It can be paraphrased as, “The United States calls China G-2 and China denies it. With whom will Korea side?”

Seok Tong-youn, former consul general in Hong Kong and now an advisor for the Gyeonggi Provincial Government, gave an answer.

“In international politics and economy, it is a reality that no solutions can be found if you leave China out. China practically has the standing of a G-2 nation,” he said.

Those young Chinese government officials nodded at the former veteran diplomat’s reply. After the lecture ended, I asked what they really thought.

They replied, “It’s the United States’ hidden intention to incorporate China into the Western order,” and “They intend to trap China with the G-2 title and transfer burdens on international issues to China.”

“Is China part of the G-2, indeed?” I toss out the question again because China’s leadership is now in the spotlight as the Cheonan’s sinking challenges peace in Northeastern Asia.

It was William Pesek, a famed financial columnist, who first coined the term G-2. He wrote that it’s changing from the G-7 to the G-2 era in September 2006 as he pointed out China’s influence in the world economy.

The term was originally considered just a novel coinage, but it started to shine in 2008 when the world faced the financial crisis that originated in the United States. The crisis arose from the imbalance of trade and capital flow between the United States and China, and the world economic recovery depended on the cooperation between the two countries.

But China waved its hand to reject the moniker. Its stated objection was, “one or two countries cannot solve international problems.”

The term G-2, however, has an innate limit. To define two countries as a group, the two should share a common ideology and values, as the G-7 did. The G-7 countries had a common goal to protect “capitalism and the market economy,” so they frequently put their heads together to find solutions when problems cropped up.

It’s hard to say that the United States and China share goals; the two countries have fundamentally different, and sometimes even hostile, perspectives on international affairs, such as the appreciation of the Chinese yuan, the nuclear programs of North Korea and Iran and human rights issues.

The United States and China, which have very different political systems, pursue their own countries’ gains. They don’t seem to intend to share leadership.

I don’t expect that will change when it comes to the Cheonan case. That’s why the West says it would be too much to ask China to shoulder a corresponding sacrifice and take on a role commensurate with its G-2 title.

“It is meaningless to have a debate on whether China is G-2 or not. Because there is no G-2 from the beginning.”

That’s my answer to the question from the young Chinese government official.

*The writer is deputy director of the China Institute of the JoongAng Ilbo.
Translation by the JoongAng Daily staff.