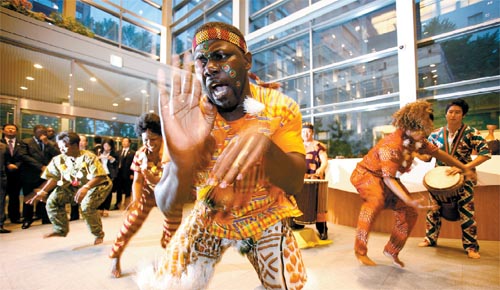 An Ivoirian percussion group and Korean musicians celebrate Africa Day on May 25 at the Raemian Gallery in Unni-dong, Jongno, central Seoul. By Oh Sang-min

Drum beats filled the air and the Raemian Gallery in Seoul’s Unni-dong bustled with spirit last Tuesday night as over 300 people, including 13 African ambassadors, Zimbabwe Prime Minister Morgan Tsvangirai, Korean Vice Foreign Minister Shin Kak-soo and Korean business figures, gathered to celebrate the 4th Africa Day and the 47th anniversary of the establishment of the Organization of African Unity.

The organization is the first pan-African organization on the African continent and was founded in 1963 to form a collective voice for African nations that today boasts a population of 1 billion.

Around the room, there were exhibition booths displaying each country’s flag, clothing and crafts.

The celebratory atmosphere was heightened by a performance by artists from Cote d’Ivoire and the delicious smell of food that had been prepared by 16 African embassies.

Tunisian Ambassador Mustapha Khammari’s wife, Latifa, participated in the event in a way that she didn’t expect.

“Our cook was sick and I prepared enough couscous to serve 100 people,” she said smiling brightly while holding an empty plate that was once full of the steamed semolina.

“Couscous is famous Tunisian dish that’s known all over the world. I think it’s a good way to give people a small picture of Tunisia,” Ambassador Khammari said. “I’ve been here for two years and five months now and the Korean friends I have invited to my embassy and residence say they have discovered that Tunisian food is something Koreans can appreciate. Even though we are so far apart in terms of distance, we are so close as friends.”

The friendly relationship between Korea and African countries is just beginning to develop, and the dignitaries present expressed their hope that relations will continue to advance.

“China is currently our top trading partner among Asian countries but I hope the Korean government and companies will invest more in Sudan and other African countries in the future,” said Mohammed Abbas, ambassador of Sudan and dean of the African Diplomatic Corps in Seoul. “Africa is the most underdeveloped continent in the world but it has enormous potential.”

“As the chair of this year’s G-20 Summit, Korea hopes to bridge the distance between developing and developed countries,” Shin said in a congratulatory speech. “In this capacity, we will make sure that the world listens to Africa and discusses a way to achieve the common goal of economic development in Africa.”

Zimbabwean Prime Minister Morgan Tsvangirai who visited Seoul to sign an investment protection agreement with the Korean government, stressed the importance of the advances Korea has made in information technology.

“As African diplomats, you are based in one of the most technologically dynamic countries in the world and have an important role to play in the new age of Africa. By following technological advancements and identifying opportunities through which your countries can benefit and grow, you will be helping all Africans,” Tsvangirai said in a speech.

Kwak Yeon-keun, the leader of the African percussion performing group Kumbaya, said the two sides can work together in areas other than just economic and industrial cooperation.

“I want to promote pure African music here in Korea because African music has influenced world music in some ways and I believe it will help Korean music to develop,” said Kwak, whose group has been giving concerts since 2005.