Expats use new skills to relate to students

Expats use new skills to relate to students 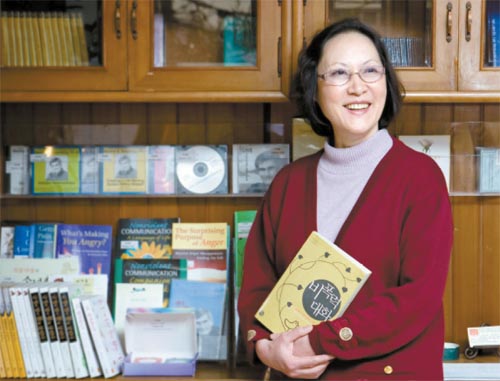 Katherine Hahn Singer and others are bringing nonviolent communication skills to the classroom. Provided by Korea Center for Nonviolent Communication

A small group of foreigners and Koreans gathers Wednesday nights in Sinchon to practice the skills of “nonviolent communication,” also called compassionate communication, in English. They talk about their students, co-workers, their marriages. Any subject is fair game. Participants empty their minds and focus on connecting with one another through honest sharing and empathetic listening.

“It is a support group for people living in Korea, completely,” said Greg Brooks-English, one of the group’s regular members.

Brooks-English discovered nonviolent communication, or NVC, in 2002 during a workshop at a Buddhist monastery in France. The self awareness he learned in meditation went hand-in-hand with NVC, which has four steps: nonjudgmental observation of an interaction, identifying the feeling that accompanies it, identifying the need that gives rise to the feeling and asking others to act in a way that meets that need.

NVC was founded by American psychologist Marshall Rosenberg, who after studying with Carl Rogers, developed steps a person can take to meet his own needs while being considerate of the needs of others. Rosenberg writes in his book, “Nonviolent Communication: A Language of Life,” that his work is motivated by the race riots he experienced as a child in 1940s Detroit. His methods have been endorsed by Deepak Chopra, author of “Ageless Body, Timeless Mind;” Jack Canfield, who wrote the “Chicken Soup for the Soul” series; and John Gray, author of “Men are from Mars, Women are from Venus.”

Brooks-English said he has incorporated NVC into his teaching, first at a foreign language high school and now at Yonsei University.

The Wednesday night group, held at the Korea Center for Nonviolent Communication, keeps him centered on NVC.

Alexandra Hayette, who teaches French in Seoul, said she also uses NVC with her students.

A practitioner since 2002, Hayette said she learned about NVC when she was working with teenagers in her native Belgium.

“Before I was a bit bad tempered,” she said. “I was very easily angry. NVC has me more connected with my emotions and needs.”

The key, she said, is to communicate her needs to her students without judging or blaming.

Demanding certain behaviors, she said, has the opposite effect.

Both Hayette and Brooks-English have practiced with Katherine Hahn Singer, who attended a workshop with Rosenberg in the mid-1990s in California and went on to become a certified NVC trainer. After 35 years in the United States, she said she came back to Korea in 2004 to spread the message of NVC to Korean youth.

In an interview at the center, Singer said the constant pressure Korean youth face to compete and achieve has made it impossible for them to know what their dreams and passions are, much less realize them.

“They experience so little control in their own lives so they become subservient, docile or they rebel,” she said.

NVC training at schools teaches educators to replace the models of reward and punishment that dominate teacher-student relationships with ones that stress genuine connection and understanding.

“They want to relate to students in a different way but they don’t know how,” she said.

Singer said about 1,000 people per year attend NVC workshops in Korea. She has taught at schools, businesses, hospitals and government agencies.

In addition to the Wednesday night group, the center offers marriage counseling, workshops and weekend courses in NVC.

“When we get in touch with our needs, we know everybody else has that,” Singer said. “At that level, we all can connect, beyond language, beyond culture, beyond gender, beyond belief.”

*For more about NVC activities in Korea, visit www.krnvc.org or call Greg Brooks-English at 010-3102-4343 or e-mail discovernvc@gmail.com.