‘iPhone girl’ sings a song of her own

‘iPhone girl’ sings a song of her own 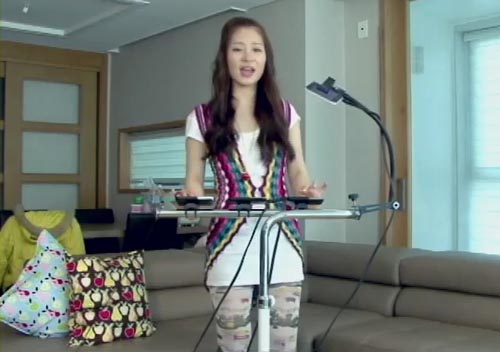 
The “iPhone Girl” Kim Yeo-hee, who gained global recognition for performing other people’s songs in videos she uploaded on YouTube, has released her first single in Korea.

Kim, who was once a regular iPhone user, gained instant fame after she uploaded two videos to the Web site last March. In the videos, she plays and sings pop songs on her iPhone using four iPhone applications, including BeatMaker and Frontier Guitar.

She uploaded her first video in March. In it, she performs the song “Irreplaceable” by U.S. recording artist Beyonce. Kim’s video got about 1.5 million hits. One week later, Kim posted a second video, of Lady Gaga’s “Poker Face,” and it was played 2 million times.

It didn’t take long before domestic and foreign media caught up, and Kim started to gain the attention of celebrities and the foreign press.

After seeing the video, Hollywood actor Ashton Kutcher wrote “Innovation Rocks” on his Twitter site in reference to Kim’s performance.

Currently, Kim is pitted against Lady Gaga on “Phones Review,” a popular mobile Web site in the United Kingdom that asked readers to nominate a new model for the iPhone 4G.

Kim’s videos have also appeared in stories by the foreign press, including CNN and New China News Agency.

In an interview with Korean Web site Sports Khan, Kim said she posted the first video because she and her friends, who are composers, had been experimenting with the smartphone and wanted to share their discoveries.

“I thought it was one way to introduce myself and my passion,” Kim said in the interview.

Kim’s new single, called “My Music,” was released to the public on Thursday. Two days before the song’s release, she celebrated her debut with a performance at the Mix Lounge in Sinsa-dong, Gangnam District, southern Seoul.