A growing obsession with ‘drunken rice’

A growing obsession with ‘drunken rice’

Makgeolli-making experts participate in a competition hosted by the Food Ministry on May 10 at Korea House in central Seoul. By Oh Jong-taek

A dozen Korean ladies outfitted in pink aprons roll up their sleeves and sterilize their hands with cloths soaked in soju liquor. Then they spend 10 minutes hand-blending steamed sticky rice, yeast dissolved in water and azalea petals, before pouring the mixture into plastic containers. “Don’t forget to put it in the cool shade and stir it every morning and night with a spoon for a week. Think of it as like growing a plant. Those of you who are successful will have your own makgeolli,” said the instructor at the podium.

The group of women - the wives of Korean diplomats - were taking a three-hour lecture on traditional Korean rice wine at the Institute of Traditional Korean Food in downtown Seoul last Tuesday afternoon. What they were making was azalea sticky rice makgeolli.

They volunteered to register for the class to learn more about the beverage, which is now gaining in popularity. Some of the students will soon leave for overseas posts with their husbands. 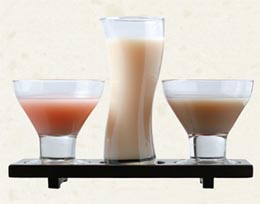 Lim Sook-do, leader of the diplomat wives’ society, says she intends to show the people at her husband’s future post how to make the milky, lightly carbonated drink.

“What we’ve learned today is going to be very useful overseas,” she said, “just like the lectures I took here years ago about tteok [rice cakes].”

The group lecture provided by the decade-old private institution is just one part of the effort by the public and private sectors to push the regional makgeolli craze sparked last year to a global scale.

According to Lee Su-kyoung, a spokeswoman with the institute, makgeolli-making lectures for individual groups have become quite popular. Two days after the diplomatic wives’ visit, a delegation of Samsung Electronics workers took the same course. “We usually don’t have male students since we are a culinary institute, but men take special interest in makgeolli lectures because they are the actual consumers,” she said. 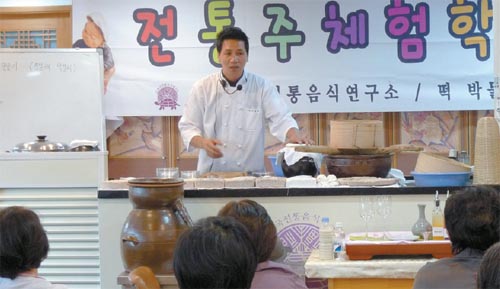 Lee Sang-kyun, center, a traditional drink specialist, teaches a group of spouses of Korean diplomats how to make makgeolli at the Institute of Traditional Food. By Seo Ji-eun

And it’s not just Koreans, either. In recent months tourist agencies are increasingly booking the rare experience for their clients.

“Before, the majority of tourist groups were Japanese, but the nationalities are getting diverse now. We had a group of scientists from Boston a few days ago,” she said. Any group of 10 to 20 members can apply for the lecture, she said, with each paying 35,000 won ($29). Teachers who speak English or Japanese are available.

Makgeolli is made from rice or wheat flour, water and yeast. Its name comes from the Korean words for rough, mak, and filtered, geolli. It was long considered a drink for farmers, laborers and country bumpkins due to its relatively cheap costs, but came into fashion in a serious way last year.

Exports have exploded. In March, $1.53 million worth of the drink were sent overseas, displacing the previous record high of $1.2 million from December 2009, according to the Korea Customs Service. Compared with the same quarter a year earlier, exports of makgeolli in the first three months of this year more than tripled. A flurry of products made of makgeolli have been invented - from cocktails to ice cream, soap and vinegar. In view of the trend, the Samsung Economic Research Institute, a leading private think tank, designated makgeolli one of Korea’s hit products of 2009.

Domestic consumers only caught on to the trend after makgeolli found startling success in Japan, where the Hallyu boom of Korean pop culture has remained strong since 2002, said Hur Si-myung, a travel writer and alcoholic beverage critic. Domestic media coverage and industry-wide efforts to promote the drink followed.

Hur claimed the popularity of the rice wine can be traced back to its vaunted health benefits, which include a massive amount of lactic acid bacteria - 500 times the levels in yogurt - and dietary fiber, both thought to aid digestion. Tourists from Japan, females in particular, were attracted to light and sweet yet tangy taste.

“Those female Japanese tourists who love Korean food tend to prefer mild alcoholic beverages. That’s probably why they took interest in makgeolli rather than the much stronger soju,” Hur said.

Optimistic about the prospects for the drink’s continuing popularity, Hur opened a “makgeolli school” for adults last October in Daehangno, where a diverse audience learns about the drink, visits well-known breweries and tastes different types. Those registered for the 10-week course include restaurant and bar owners, alcohol exporters, housewives, university students and even Koreans living abroad.

“Makgeolli is attractive in that it tastes different every time you drink it - just like kimchi does. It’s an organism. Adults in Korea spend so much time drinking alcohol, you need to know more about what goes through your body,” he said.

Over the past year, makgeolli bars have sprouted like mushrooms even in Seoul’s trendiest areas, such as Cheongdam-dong, Apgujeong-dong and Hongik University. Even five-star hotels have jumped onto the bandwagon.

The Lotte Hotel, for example, opened an “Amazing Makgeolli Bar” at its Sogong-dong branch in central Seoul last month, serving makgeolli made from black bean and sweet potato in addition to colorful flavored makgeolli in strawberry, banana, melon and Korean black raspberry varieties. Bartenders have grown bolder and bolder in concocting makgeolli cocktails, adding ginger, ginseng and various liqueurs, such as peach and plum.

The rise of derivative makgeolli products has created a whole new market. While a regular plastic bottle of makgeolli from traditional producers, such as Seoul Takju’s Jangsu Makgeolli, costs 1,000 to 1,300 won, those made by master artisans at fine breweries like Baedari, or by mass producers of alcoholic beverages such as Kooksoondang, Jinro or Baesangmyun Brewery, can cost around 10,000 won or more per bottle.

“High-priced makgeolli has expensive ingredients like domestically grown quality rice, or they have costly packaging. Although rice makgeolli has become fashionable these days as the government encourages drink producers to consume more rice, the majority of existing mass-produced makgeolli is made of [wheat] flour,” said Lee Sang-kyun, a traditional drink specialist and lecturer at the Institute of Traditional Korean Food.

Those people accustomed to flour makgeolli say rice makgeolli tastes stale because the former is seasoned with sweeteners like aspartame in the final stages of production, the expert said. “Originally, the harmony of bitterness and sweetness was the true virtue of well-made rice makgeolli,” he said.

But dragging the cost of makgeolli up to the level of pricey drinks such as sake, wine or whiskey may not be realistic, he added, because makgeolli is highly perishable. 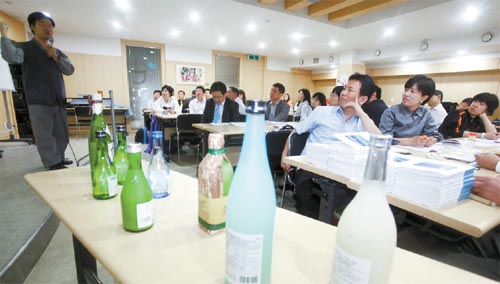 The Korean government has long been concerned about the difficulty Westerners have in saying Korean words, and the effect that might have on their appetite for Korean food. Last year, for example, it officially renamed tteokbokki, the spicy rice cake popular at street vendors here, as topokki.

The ambitious drive to push makgeolli outside Asia included a similar initiative, and when the results were announced last Wednesday they caused a stir.

The Ministry for Food, Agriculture, Forestry and Fisheries held a public contest to develop an official English-language nickname for makgeolli, and last week it announced the winner: “Drunken Rice.” In second and third place were “Makcohol” and “Markelixir.”

The ministry said in release earlier that the nickname should be easy and fun for foreigners to pronounce, and pledged to use the winning name in its marketing activities.

Soon after the results were released, however, the ministry’s Web site was bombarded with postings criticizing the move.

“Unlike in Korea, where alcohol drinking is generously accepted by society, the English word ‘drunken’ conveys considerably negative connotation. Besides, would you find it easy to understand wine if its origin countries called it ‘drunken grape’?” wrote Choi Hae-su.

Another citizen, Lee Jae-hong, wrote, “I live in Japan and nine out of 10 Japanese here know makgeolli as it is. Why are you trying to give it an English nickname when it is gradually gaining recognition?”

In response to the outcry, the ministry backed off, saying it won’t adopt the nickname after all, since “the event was meant to fan the makgeolli craze further among the general public,” according to a government official.

Instead, the Presidential Council on National Branding will come up with a simplified romanization of the word by the end of June, the official added, without providing details.

The writer and critic Hur proposed in a recent publication titled “Makgeolli, Who Are You?” that brewed makgeolli should be cataloged in terms of the bitterness, sweetness, sourness and cloudiness; that a makgeolli research center be established; that some 780 small and large breweries nationwide be developed as tourist attractions; and that makgeolli sommeliers be trained. Hur also said it was necessary for Korea to come up with an official topographical map of the flavors of makgeolli - like the diagrams used on wine bottles.

It’s a critical stage in the makgeolli boom, Hur said, and he’s optimistic. “Trends come and go. But makgeolli has the potential to go beyond ending up as just another fad.” 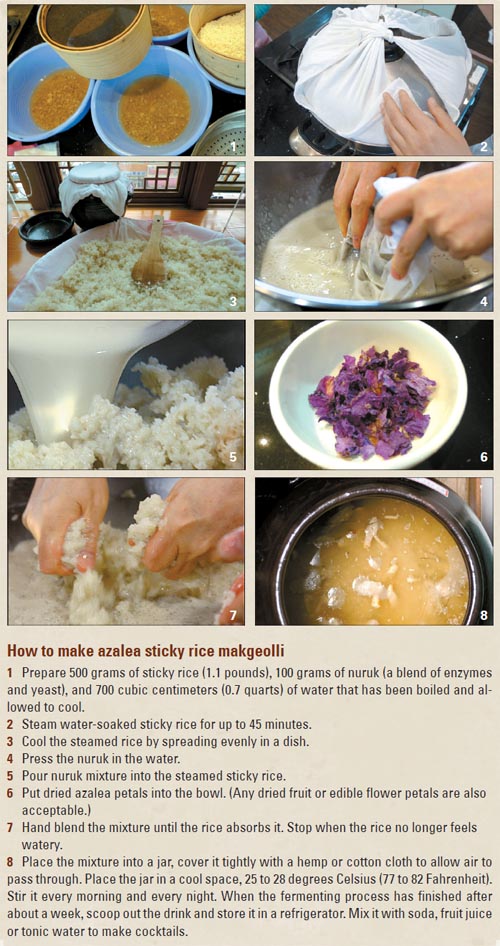