Police crack down on rumor mongering

Police crack down on rumor mongering 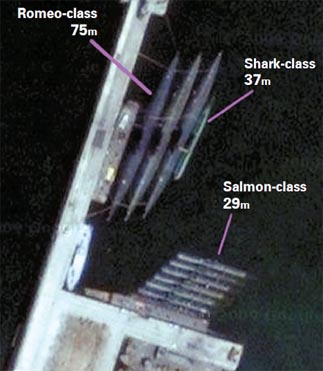 Lawmaker Song Young-sun released a satellite image of North Korea’s Bipagot naval base from Google Earth, refuting the North’s assertion it does not have salmon-class submarines. Song said six salmon-class subs can be seen in the image.

Seoul police yesterday were trying to identify the origins of printouts and Internet messages that questioned the conclusion of the multinational investigation into the cause of the warship Cheonan’s sinking.

According to the police in Nowon District, northeastern Seoul, dozens of printouts have been distributed calling for a reinvestigation into the sinking and demanding key evidence to reveal the real truth.

Titled “We Can’t Believe the Cheonan Probe Results,” the materials were co-produced by about 30 left-leaning civic groups.

Since the investigating team blamed North Korea for the sinking on May 20, authorities have been trying to crack down on rumors accusing Seoul of fabricating the charge, and have detained for questioning several “netizens” for spreading such ideas.

Intelligence officials released a photo of a North Korea-made MS-29 submarine, which is the same class as the salmon-class sub. [YONHAP]

Seoul police were also trying to identify the writer of an Internet message that claimed South Korea was poised to strike North Korea within a day or two in retaliation.

The police said this message was found on other portal community sites and has been posted to Twitter by some users.

Separately, the Gyeongbuk Provincial Police Agency in North Gyeongsang said it was questioning three individuals for spreading messages that contradicted the Cheonan findings.

According to the provincial police, the three people claimed on Internet portal sites that the ship actually sank after colliding with a U.S. nuclear submarine. The North Gyeongsang police said they had by yesterday deleted 709 such messages and replies in support of such messages.

Police in both Seoul and North Gyeongsang said dissemination of malicious and groundless information is punishable by law, and violators could be sentenced to up to five years in prison and fined 50 million won ($41,650).

Foreign Minister Yu Myung-hwan yesterday lamented the prevalence of these “false claims.” In an address to ministry officials, Yu said there are still people who don’t believe the evidence given by South Korea and who only accept North Korean claims of innocence. He called the situation “sad and unfortunate.”

To quell doubts among the public, the Ministry of Defense said it will allow a selected group of Twitter users and bloggers to view the wreckage of the Cheonan next Tuesday.

The ministry sent a Twitter message to some 1,600 people yesterday saying that 20 randomly selected Twitter users will be offered a firsthand look at the remains of the ship at the Second Fleet Command in Pyeongtaek, Gyeonggi. They will also be allowed to photograph and video the wreckage.

According to the ministry, the delegation will also include 10 of the most active bloggers on national defense. Previously, the ministry had only granted journalists, politicians and retired officers access to the ship.

The Twitter winners will be announced at 10 a.m. Friday.

A ministry official said the participants will be briefed by the investigation team, get a closer look at the Cheonan and then have the question-and-answer session with investigators.

“It will be an opportunity for those in their 20s and 30s to have their doubts cleared,” the official said. “At the same time, they will hopefully have more faith in the government and the military.”

On Sunday, the Defense Ministry rebutted the North’s claims that the investigation into the Cheonan sinking led to “fabricated” conclusions.

The ministry also refuted the North’s argument that it didn’t have any small-sized, “salmon-class” submarines, the type that was implicated in the attack.

Son Gi-hwa, who handled intelligence analysis on the investigation team, said Seoul has confirmed that Pyongyang even exported 130-ton salmon-class submarines to a Middle Eastern nation a few years ago.

In a rare news conference last Friday, the North’s National Defense Commission said the South “faked” the sinking of the ship to push the Korean Peninsula “toward the brink of war.”

Maj. Gen. Pak Rim-su, head of the policy department at the commission, said the investigation team only included nations sharing the South Korean suspicions of the North’s responsibility. The Defense Ministry here rejected the claim, saying experts from Sweden, a neutral nation, were included.