WHO urges women to butt out

WHO urges women to butt out 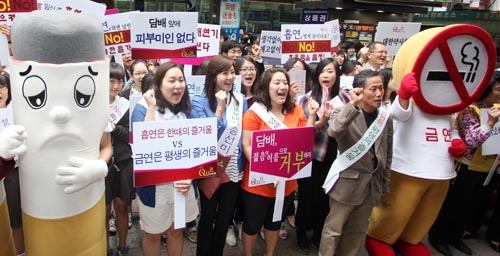 Twenty-six-year-old Kwon has smoked since she was in middle school. By high school she was buying “cute,” imported cigarettes with flavors like chocolate and vanilla, which she would smoke with her friends. Now she has graduated, working at a foreign company in Seoul, and she wants to quit because she’s been having breathing problems. But she’s scared to give it up, in case she gains weight.

In Korea, smoking among women is on the rise, in contrast to a decrease in smoking among men, according to the Ministry of Health and Welfare. In its survey of Koreans 19 or older, the percentage of female smokers here has risen to 7.4 percent as of 2008, from 5.2 percent in 2001. In the same period, smoking among men has dropped to 47.7 percent from 60.9 percent.

And the figures for women may not tell the whole story.

“There are still many women in Korea who hide their smoking habits, so the actual number of female smokers is much higher,” said Im Min-gyeong, head of the National Cancer Information Center. 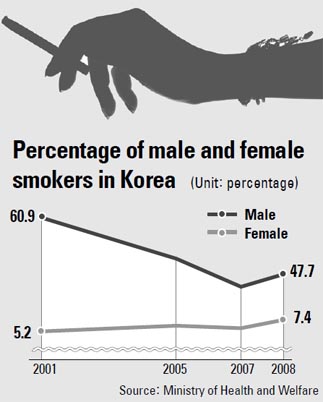 A recent study by a team at Seoul National University Hospital led by professor Jun Jong-kwan found that although only six out of 1,090 pregnant women answered that they are smokers, urine tests revealed that 32 of them were habitual smokers.

Ahead of its annual World No Tobacco Day yesterday, the World Health Organization announced that this year’s theme is “gender and tobacco with an emphasis on marketing to women.” Experts here say that the key reason for an increase in female smokers is successful marketing strategies by tobacco companies.

“There are many ads which use words like ‘slim,’ ‘mild,’ and ‘light’ in order to appeal to women,” said Jung Yeong-chul, a division head at the Korea Institute for Health and Social Affairs. “Recently, tobacco companies have been active in volunteer programs to support low-income families or women’s’ sports teams, so that they can make a better impression on women.”

The impression isn’t borne out by facts. Numerous studies contradict the common notion that smoking helps to prevent weight gain. According to research by a team at the University of Helsinki which was published in the American Journal of Public Health, female adolescents who smoke at least 10 cigarettes a day have an average waist size 3.4 centimeters (1.4 inches) thicker when they are adults than women who don’t smoke.

“Most of the toxins in cigarettes are fat-soluble,” said Kim Chul-hwan, vice chairman of the Korean Association of Smoking and Health. “On average, women have about 10 percent more fat than men, which means that these fat-soluble toxins are absorbed more readily by women.”

Even so, antismoking campaigns geared towards women are almost nonexistent in Korea. One exception is the Jeju Health Center, run by the regional government there. It said that when its antismoking clinic expanded to include a women-only counseling booth in March 2008, women who came in for counseling increased from 9.7 percent of total counsel-seekers in 2007 to 14.2 percent in 2008, and 15.6 percent in 2009.

“There was a worry [in the Health Ministry] that if we launched an antismoking campaign geared toward women, it might be perceived as being sexist,” said Lee Suk-gyu, a manager at the ministry’s division of healthy life and oral health. “However, we intend to be more proactive in creating antismoking campaigns for women in the future.”