DH gets in the swing of things

DH gets in the swing of things 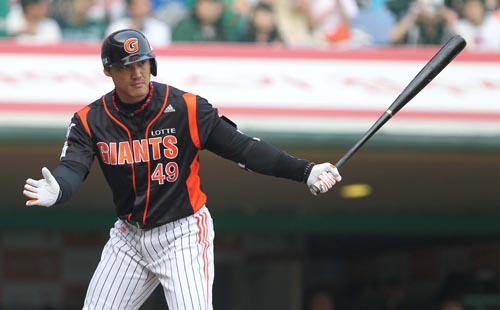 The Lotte Giants’ Hong Sung-heun steps into the batters box in a game against the SK Wyverns on May 30. [YONHAP]

The 33-year-old veteran is currently tied for first in home runs with 14, and leads the league with 59 RBI and a batting average of .345 as of Monday. He has already surpassed the 12 home runs and he knocked out during the 2009 season, and is well on the way to topping last season’s 64 RBI.

Hong has tweaked his swing and increased his hitting range, and is making good contact and power on opposing pitchers. It’s a side of Hong that was hard to find last season, and so far he is the best hitter in the KBO this year.

“The biggest difference for Hong this season is his improved hitting range which allows him to hit more home runs,” said Lotte batting coach Kim Moo-kwan. This means Hong is making good contact and timing the pitches well regardless of their course and location.

What makes Hong’s performance impressive is that he is a designated hitter. Yang Joon-hyuk of the Samsung Lions and Kim Jae-hyun of the SK Wyverns are full-time designated hitters but have been limited to 40 games this season. Hong, on the other hand, has started all the games for Lotte so far.

One of the secrets to Hong’s success is hard work and dedication.

During home games, Hong keeps himself busy by making good use of the club’s indoor batting cage. When similar facilities are not available on the road, he jogs along the bullpen area. When sitting and waiting on the bench, Hong sometimes practices heavy breathing to get his adrenaline pumping.

Other designated hitters have maintained similar routines in the past. Ma Hae-young was known as an avid runner while Choi Dong-soo of the LG Twins is known to practice his swings in the hallways of the Jamsil Stadium.

While it might be difficult for designated hitters to keep themselves focused and ready to produce at a moment’s notice, there are some positives to playing the one-dimensional role. When Hong was a catcher for the Doosan Bears, his listed weight was 87 kilograms (192 pounds). As one of the most physically demanding positions, catchers often lose an average of four to five kilograms during the summer months. That’s one of the reasons why not many batting champions are catchers.

Hong now weighs 95 kilograms. He put on five kilograms of muscle during the offseason and continues a weight-training routine twice a week for an hour to two hours at a time.

“Hitting is one of those areas of the game that needs constant work. Once you lose track, your numbers can dip in a matter of a moment,” said Hong.