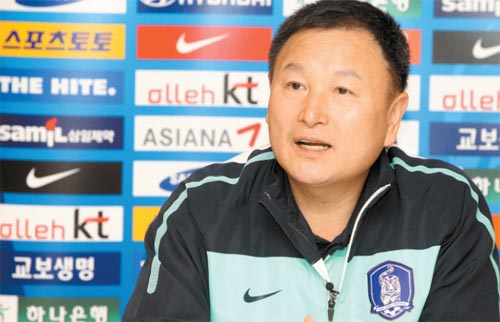 Lee Dong-gook got his long-awaited return ticket to the World Cup, while Lee Keun-ho’s was stamped for home earlier than expected, it was announced yesterday.

National football team manager Huh Jung-moo released his final 23-man roster for the 2010 World Cup at a press conference at a hotel in Neustift im Stubaital, Austria. Huh made three cuts to the 26-man preliminary list: forward Lee Keun-ho of Jubilo Iwata and midfielders Shin Hyung-min of the Pohang Steelers and Koo Ja-cheol of Jeju United.

“It doesn’t feel good. It’s always difficult to cut players who have sweat and trained together with the team,” said Huh. “I had to consider which players would help the team in the three group matches.”

The loss of Lee Keun-ho came as a surprise. He had been a regular starter throughout much of the regional qualifying stages, and was expected to make the final cut. But his prolonged slump - Lee hadn’t scored a goal since a penalty kick in a friendly against Iraq in March 2009 - opened the door for others.

Huh said the decision was a tough one. 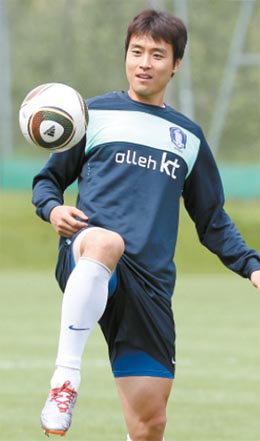 “Lee Keun-ho has been with the team a long time but he hasn’t scored a goal in over a year,” explained Huh. “I gave him lots of opportunities over the course of the past 15 months, but he couldn’t break out of his slump. We’re not going to South Africa on a vacation.”

In his place, Lee Dong-gook of Jeonbuk Motors got the nod and will play in the World Cup for the first time since the 1998 games in France, when the forward made a brief appearance in a match against Netherlands as a promising 19-year-old. Lee was left off the 2002 World Cup team and missed the 2006 World Cup due to an injury to his right knee. Lee has been recovering from a slight tear to his right hamstring suffered during the friendly match against Ecuador on May 16, but got the news yesterday that the tear had healed properly.

“Medical professionals have told us he’ll be available as a second-half substitute in the opening match against Greece and can play full-time against Argentina and Nigeria,” said Huh. “Lee will be able to participate in regular team training in a week.”

Two players who made the final cut may well be the future of the team. Forward Lee Seung-yeol, the 2008 K-League Rookie of the Year, and midfielder Kim Bo-kyung played an integral role in the quarterfinals run at the U-20 Egypt World Cup last year.

FC Seoul’s Lee Seung-yeol has recorded three goals in eight international appearances while Kim Bo-kyung is a versatile midfielder who is capable of playing winger, center or forward. Kim signed with Oita Trinita of J-League Division 2 this year and has recorded six goals in 11 appearances. In 2001, the two players were students at Huh’s youth football academy, the Yongin Football Center. 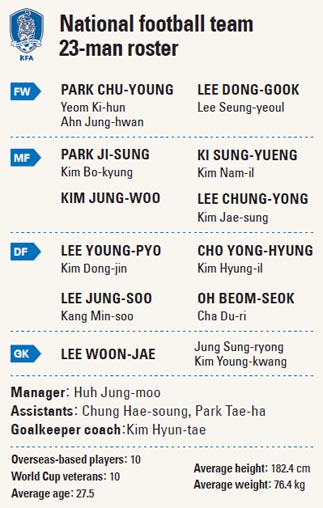 “I didn’t select the two players just to develop them for the future. They’re capable of contributing to the team,” said Huh.

Huh had initially planned to take all 26 players regardless of the cuts. However, final decisions on such matters are up to the professional teams the athletes play for. It looks highly unlikely that Lee Keun-ho or the other two players will make the trip to South Africa.

Korea will play its final friendly match against Spain in Innsbruck, Austria, on Friday. Spain is second in the FIFA world rankings and is currently riding a 10-game winning streak. It’s one of the favorites to win the World Cup and the final test won’t be easy for the national team, but Huh believes it can serve as a valuable lesson as Korea prepares for the World Cup.

“We have nothing to lose. We can give up 10 goals in the match and still come away with something to gain,” said Huh. “It’s important to show our game plan. The game will serve as a good tune-up match for Argentina.”