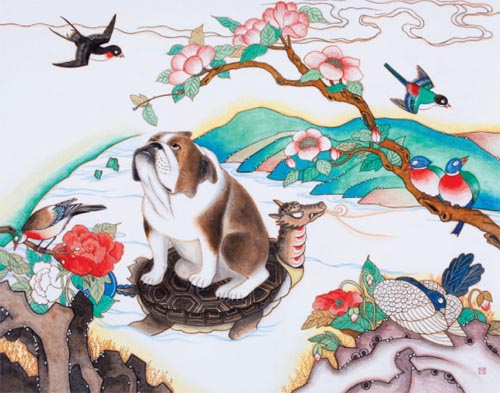 “Dowongyeong” (“A Scene of a Taoist Paradise with Peach Blossoms”), by Kwak Su-yeon, shows elements of minhwa, or Korean folk painting. Provided by Erl Gallery

The solo exhibitions of two local artists who use elements of traditional Korean painting but to very different effect open this week.

At first glance, Kwak’s works seem to be faithful reproductions of minhwa, or Korean folk paintings known for bold contrasts of vivid colors and naive styles.

But with a closer look, viewers will see cute cartoonish dogs with various expressions on their faces and sitting amidst books and stationary, a composition that is typical of traditional chaekgado (book still life) paintings, or sitting amidst rocks, water and flowers, as in traditional Taoist paradise paintings. 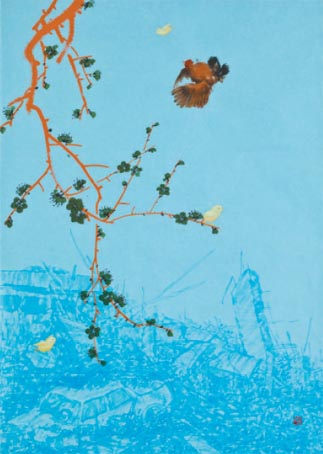 The dogs could be a metaphor for the artist herself, for human beings or may just represent dogs with some independence, Kwak said at a press conference yesterday at the Park Hyatt Seoul hotel in southern Seoul.

“My past works featuring dogs with luxury goods had a satirical tone. They showed people who were driven to work outside the home in order to make enough money to purchase luxury goods, while their dogs were left at home to enjoy them,” Kwak said.

“On the other hand, the works for this exhibition have more lyricism,” she continued. “The dogs resting amidst the books or journeying to a Taoist paradise reflect my desire to escape my own reality, in which I work for eight hours per day alone in my studio, and leave for a utopia.”

Kwak added that she faithfully follows traditional minhwa techniques and uses traditional natural pigments, because she continues to be fascinated with the beauty of minhwa paintings.

His paintings, made in the traditional style, feature dim shadows of ruins after wars or redevelopment projects, in the backgrounds. In the foreground are plum blossoms, which were the preferred icons in muninhwa, and roosters flying unrealistically high on the canvas.

“Plum blossoms are some of the first to bloom in spring. This makes them the heralds of spring,” said Kho Choong-hwan, an art critic. “The roosters appearing in Seong’s latest works are the heralds of dawn. For this reason, plum blossoms and roosters have something in common .?.?. This is the way the artist plants the seeds of hope against the scars of warfare and the ruins of life.”