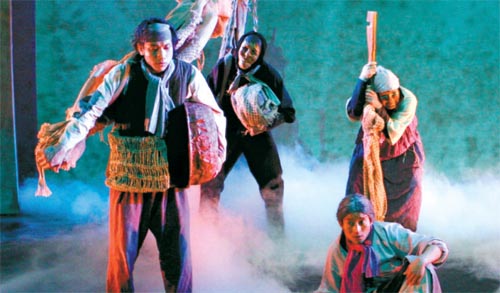 In 2006, the Cho-In Theater produced “The Angel and the Woodcutter,” above, a fusion production based on a folktale. This year they apply that approach to “Macbeth.” Provided by the organizer


Fans of the Bard, take note! This week, one of William Shakespeare’s most beloved tragedies is coming to Seoul.

But this isn’t the “Macbeth” you’re used to. The Cho-In Theater’s production recasts the story in traditional Korean music and dance. Viewers will get the chance to see the characters in an entirely new light, though the liberal changes may alarm purists.

“Over the course of many revisions, the script and story have diverged significantly from Shakespeare’s original, with some scenes altered and others omitted - it will provide new insight into the thoughts of the major characters in the play,” the theater company said.

This isn’t the first ambitious adaptation undertaken by the Cho-In Theater production company, which was officially formed in 2002 and is known for performances that rely on the actors’ physical movements rather than spoken language. For example, in September 2009 the troupe staged “Hotel Splendid,” which was originally written by American playwright Lavonne Mueller and deals with the issue of comfort women under Japanese colonial rule in Korea.

“It was the first time that the play had ever been presented on stage [in Korea]. The play was successful here and was also invited to Argentina, where it was well received by both critics and audiences alike,” said Kim Yeon-jeong, director of the planning team at Cho-In.

In creating a Korean version of Macbeth, Park Chung-euy, the artistic director of the Cho-In Theater, said he “wanted to examine not only the confluence of ambition and fate that is integral to Macbeth, but also the cyclical and reciprocal nature of conflict, from family feud to coup d’etat.”

*Macbeth by Cho-In Theater will run from June 4 to 13 at the National Theater of Korea’s Small Hall Dal. The play is presented at 8 p.m. on weekdays and at 3 p.m. on Saturdays and Sundays. There is no performance on June 7. All performances will be presented with English subtitles.