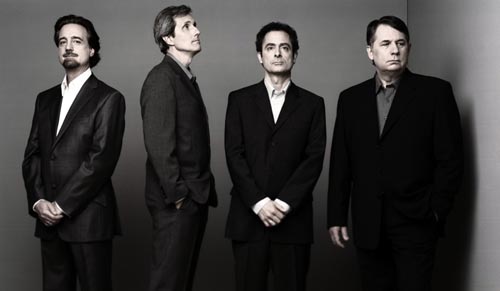 The Emerson String Quartet, which takes its name from poet and philosopher Ralph Waldo Emerson, is back in Seoul six years after its previous visit. The chamber ensemble, now in its 34th year, will perform at LG Arts Center on Sunday. See MUSIC, left. Provided by LG Arts Center

Thursday: Edward Auer, an American classical pianist who has long been recognized as a leading interpreter of the works of Chopin, is holding a concert in Seoul. Auer is currently a professor of piano at the Jacobs School of Music at Indiana University in Bloomington, Indiana.

Thursday: Sports Seoul is hosting a concert to cheer the Korean footballers for the upcoming 2010 FIFA World Cup, which will be held in South Africa. The Prime Philharmonic Orchestra will perform “Nessun dorma” from Puccini’s opera “Turandot”; “Oh, Happy Day” from the movie “Sister Act”; and “Memory” from the musical “Cats.” Of course, the 2002 World Cup theme song “Champions” will be also played.

Sollscher has released 19 records over his career, and his guitar interpretations include everything from Bach to The Beatles. The Swedish artist will be performing on Sunday.

Other artists performing during the festival include the Japanese world music duo Gontiti, French guitarist Claude Ciari and the all-female Botticelli Guitar Quartet.

The concerts start at 8 p.m. on Saturday, Tuesday and Thursday, and at 5 p.m. on Sunday. There are no concerts on Monday or Wednesday.

Sunday: Hailed as “one of America’s most impressive string quartets” by The New York Times, Emerson String Quartet returns to Korea after six years. The quartet will perform some of their repertoire, including Mozart’s “Dissonance” and Dvorak’s “American” quartets.

June 12: Only seven months after his first concert in Korea, Mika is returning to Seoul next week.

Mika, a British singer/songwriter, released his first full-length studio album in 2007. As tickets to his first concert in Seoul sold out in just 10 minutes, he is coming back to give those fans who weren’t able to buy tickets the first time around a chance to see him.

JOSHUA BELL AND THE ACADEMY OF ST. MARTIN IN THE FIELDS

June 22: Joshua Bell, the American Grammy Award-winning violinist, and the English chamber orchestra The Academy of St. Martin in the Fields will hold a concert together, marking the beginning of the 2010 Ditto Festival.

THE ADVENTURES OF PINOCCHIO

Friday to Sunday: The famous children’s tale “Pinocchio” will be performed as an opera in its original English format.

June 7 to 10: This opera is staged through the cooperation of Korea and Italy as part of the first Korea Opera Festival and the 19th Anniversary of the Gloria Opera Company.

June 12 to 13: This version of “Carmen” reconstructs French composer Bizet’s opera Carmen into a flamenco dance drama, making it easy for general audiences to understand and enjoy.

June 12 to 13: Hofesh Shechter, the winner of the British Critics’ Circle National Dance Award for Best Modern Choreography in 2008, presents his highly-anticipated new work “Political Mother.” Shechter and his young and talented dance company exploded onto the international dance scene with the opening dance sequence for the hit TV series, “Skins,” seen by millions of viewers, and the worldwide success of “Uprising” and “In Your Rooms.”

Political Mother promises to draw Korean audiences into Shechter’s world, where astonishing percussive grooves and a raw and honest physicality mark him as one of the most exciting artists to emerge in recent years.

June 25 to 27: The Korean version of the jukebox musical returns to Seoul at the end of the month following its nationwide tour.

Ongoing: “Pan,” meaning open stage, ruckus or celebration, is a performing arts piece directed by Kim Duk-soo, one of the most revered gugak, or traditional music, performers in Korea. Pan is made of traditional Korean plays in which masked performers play music, dance and act in a wide open space.

The performance starts at 7:30 p.m. on Wednesdays through Fridays and at 4 p.m. on the weekends.

June 16: In honor of “Dano” - the fifth day of the fifth lunar month -the Folk Music Troupe of the NCKTPA will present a special performance of the traditional Korean folktale “Chunhyang.”

After the performance, the audience is invited to join the cast outside to take part in some traditional customs and games of Dano.

To June 8: The Modern Dance Association of Korea presents its 29th annual modern dance festival. Some of the best dance troupes and choreographers from Korea and around the world gather to perform, give workshops and network with other dancers.

Festival highlights include the Austrian dance troupe Liquid Loft’s performance of “Running Sushi” on Sunday. Running Sushi has a nonlinear story line that audience members help assemble, much like a customer might choose various sushi pieces from a conveyor belt at some Japanese restaurants. The performance takes its inspiration from Japanese samurai and manga culture.

Ticket prices vary according to each performance.

June 9 to 13: This festival in Bupyeong in Incheon presents a large variety of pungmul folk music performances by musicians from Korea and other Asian countries.

The festival also features a tug of war with over 2,000 participants pulling on either side of an 8-ton, 100-meter rope.

June 11 to 13: This festival is a spirited celebration of spring and the ocean. The word “eobang” describes the lively attitude of the fishermen in the coastal regions, and the deep meaning of this name is reflected in the festival.

Visitors to the festival can try catching fish with their bare hands, participate in a cooking contest or sample a wide selection of interesting cuisine.

Popular tourist destinations such as Gwangalli Beach and the Gwangan Bridge are located nearby.

June 11 to 14: This festival, which is also known as the Hansan Mosi Cultural Festival, is held in Korea’s most famous region for ramie, a plant similar to flax.

The festival offers a range of entertaining events and activities including a Ramie Fashion Show and an exhibition demonstrating how ramie is made into fabric.

The ramie plant is also used in food, and visitors to the festival can try rice cakes, ice cream, tea and other refreshments made from ramie.

From Seoul Station, line No. 1 or 4, take a train to Seocheon.

June 18 to 20: Ulsan began its rise as the major iron industrial center of Korea in the 1960s. This festival is organized around the Ulsan region’s traditional iron culture. Activities include a traditional folk game called soeburi, pungmul performances and various hands-on programs.

From Seoul Station, line No. 1 or 4, take a train headed toward Ulsan.