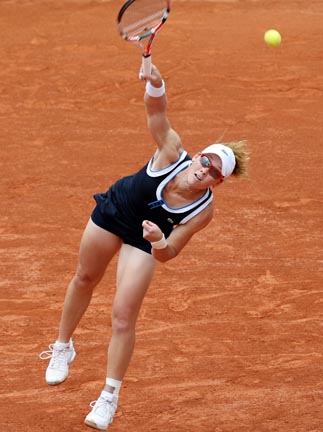 Australia’s Samantha Stosur serves the ball to Belgium’s Justine Henin during their fourth round French Open match on May 31. [AP/YONHAP]

PARIS - Justine Henin received a standing ovation on Monday but it had a hollow ring, as the Belgian’s 24-match winning run at the French Open came to a juddering halt and shredded her script for a triumphant return.

The four-time champion failed to scale the heights she achieved when completing a rare hat-trick of titles here in 2007 and the 27-year-old was dumped out in the fourth round by Australia’s Samantha Stosur.

Stosur, who reached the semifinals last year, sabotaged an eagerly anticipated quarterfinal between Henin and Serena Williams but was well worth her 2-6, 6-1, 6-4 victory as she moved through to face American world No. 1 Serena Williams.

“I can’t really believe it,” the 26-year-old Australian said. “[After losing the first set] I told myself to just keep going. I believed in myself.”

Williams sped into the last eight with a 6-2, 6-2 defeat of Israel’s Shahar Peer, despite a shocking start when she lost the opening seven points on Court Phillipe Chatrier.

With the clay court slam rumbling towards next weekend’s climax, the remaining four men’s and women’s quarterfinal berths were up for grabs on day nine - exactly a year since Rafael Nadal’s fourth-round defeat by Robin Soderling sent shockwaves through the game.

Nadal was hoping to banish that bitter memory later against Brazil’s Thomaz Bellucci and join the other members of the world’s leading three men in the last eight. World No. 1 Roger Federer advanced on Sunday in the top half of the draw and Serbia’s Novak Djokovic, who beat his first three opponents here with a minimum of fanfare, moved into the business end of the tournament on Monday.

Up against Robby Ginepri, the sole American man to survive to the last 16, Djokovic initially had some sticky moments before leaving his opponent face-down in the Parisian dust. Ginepri managed his first set in five meetings off third-seed Djokovic to level the match but was eventually overwhelmed by the razor-sharp serve - resorting to some impromptu push-ups after being bowled over by one fierce exchange.

Ginepri was left to rue his bout of showmanship, which entertained the fans but did little for his concentration.

“Maybe that took a little bit of my focus away doing that. I’ll probably never do push-ups again on court,” the 27-year-old said.

Melzer, the oldest man left in the draw, became the first Austrian since Thomas Muster in 1998 to reach the last eight when he knocked out Russian qualifier Teimuraz Gabashvili 7-6, 4-6, 6-1, 6-4.

Williams looked in far better health than on Saturday when she had a check-up by a doctor during her defeat of Anastasia Pavlyuchenkova, striking six aces to dispatch the disappointing Peer in quick time.

“I seem to always be able to turn it up during this particular stage maybe, the fourth round, for some reason,” the 28-year-old, who won the title here for the only time in 2002, told reporters. “Hopefully I turn it up again.”

The same could not be said of Henin on Monday. Making her return this year from a retirement that she announced just before the 2008 French Open, Henin has struggled to find the old spark. She scrambled past Maria Sharapova on Sunday but was a shadow of her former self against Stosur despite winning the first set in 32 minutes. When Stosur upped her game Henin could not respond. She was broken at 4-4 in the deciding set.