Is voting a duty or a right?

Is voting a duty or a right? 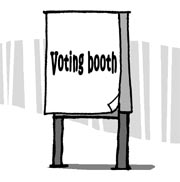 Some 50 years ago, Anthony Downs, an American public policy and public administration scholar, introduced a theory on voter turnout with the formula R=BxP-C. Simply put, you will get voter turnout (R) when you multiply the expected benefits (B) of the election of a candidate of your choice by the probability (P) that your vote will play a pivotal role in the election and then deduct the cost of voting (C). Since the chance that a single vote will play a pivotal role in an election is extremely slim, the result of B multiplied by P will be very minimal.

On the other hand, the cost and time consumed when deciding on a candidate and finding the way to the polling station are not that small. Therefore, the probability of getting a negative figure for R is high.

Downs concluded that a rational, self-interested voter would thus choose not to vote. Nevertheless, there are many people who cast ballots. How can this paradox be explained? Many scholars have presented a variety of theories. One is the risk-evasion theory that says that people vote because they cannot bear the idea that their candidate will be defeated by one vote if they do not vote. The answer Downs presented was that people voted to defend democracy. If everybody didn’t vote to pursue their own interests, the country’s democratic system would collapse. Because the loss would be even greater in that case, they prefer to bear the cost of voting.

No matter which theory is right, it is true that democracy is maintained by the power of the vote. That is why all countries of the world try hard to raise voter turnout rates. In Britain, where the general elections were held recently, they simplified voter registration by connecting Facebook, which is popular among young voters, with the Web site of the election commission. The United States, which will hold midterm elections in November, is planning to allow some overseas residents to send their absentee ballots by e-mail. Other countries have even introduced compulsory voting systems: Australia imposes a fine for a failure to vote and applies a prison term for failure to pay the fine; Belgium revokes the right to vote if one fails to vote more than four times; and Bolivia freezes a salary for three months if one has no proof of voting.

Of course, there is strong criticism that these practices infringe on the freedom and rights of the people. But the opinion that voting is the duty of the people, just like the payment of taxes and service in the military, is also strongly supported.

Many people worry that voter turnout for today’s local elections will be low. The authorities aim to raise the figure to over 50 percent, at the least. If they fail to achieve that goal, they will have to consider taking an extreme measure, like implementing a compulsory voting system. I sincerely hope that the number of voters who ignore the Downs paradox will increase this time.