[In-depth interview] India is the next frontier for Korean firms

[In-depth interview] India is the next frontier for Korean firms 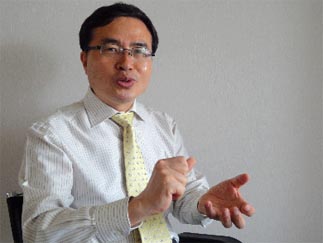 India, the world’s largest democracy with an increasingly affluent population of 1.2 billion people, offers a golden business opportunity for Korean manufacturers and builders as it rapidly accelerates efforts to upgrade outdated infrastructure, which has hindered the growth of manufacturing industries and supply networks. As a result, India’s services and IT industries have disproportionately outgrown industrial and manufacturing sectors - an unusual pattern for developing nations where the normal process is a steady shift from agriculture to first industry and then services.

This means that India offers vast business opportunities for Korea’s small and midsized manufacturers and builders, said Oh Hwa-seok, president and chief executive of the India Economy Research Institute. Oh, a former journalist at Maeil Business Daily for more than two decades with a Ph.D. in economics, taught at Nehru University in New Delhi for two years before he returned Seoul and opened Korea’s first think tank devoted to studying the Indian economy and industry. His new research center has 50 Indian analysts operating in India, who produce reports on the local economy and offer consulting services to small and midsized Korean companies hoping to enter the Indian market or expand there.

Q. Tell us how you became involved in studying India.

A. It started in 2000 when I ran a special series in Maeil Business Daily about India’s tech boom. I visited Bangalore, India’s version of Silicon Valley, and met with industry people, Korean companies there, Indian businessmen and government officials. After that, a lot of the Korean media started to report about India’s IT boom and called me to get contacts or my comments about the situation there. And then I found out there are only a few Koreans who can give expert opinions or comments about the Indian economy. So I thought “Why don’t I do that?”

So I started to study about the Indian economy and published several books on Indian businessmen and companies. I was selected by the Korea Foundation to be a visiting professor at Nehru University to teach about the Korean economy and politics for two years. In the meantime, Korea and India signed the Comprehensive Economic Partnership Agreement in January so I returned home and created this institute with the help of top Korean businessmen interested in doing business in India.

Tell us about the prospects of the Indian market.

Many people compare India with China as the world’s fastest-growing emerging markets. But while there are about 40,000 Korean companies doing businesses in China, there are less than 400 in India. Certainly China is closer to us - geographically and culturally - and businessmen may feel more comfortable operating there than in India. But now with the Chinese market increasingly saturated and the government far less eager to attract foreign businesses, India can be a perfect alternative with a sizeable consumer market that is far bigger than other rising Southeast Asia markets like Vietnam.

India is a democratic country with slow but stable social progress, unlike China, where the lack of political freedom has the potential of producing social unrest as its economy keeps growing. India is a highly democratic country with freedom of speech and the press, and where social and economic policies based on negotiations and compromises, albeit slow, among various political and social parties.

The biggest challenge in the Indian market is the poor infrastructure, which hinders logistics and distribution channels and subsequently manufacturing. But the Indian government is fully aware of this and is spending several billions of dollars every year to build new infrastructure and upgrade existing ones, including electricity networks, nuclear power plants, roads and railways. So there are great business opportunities for Korean construction, engineering and energy companies.

What’s unique about the Indian economy is that the country’s IT and service industries have far outgrown the manufacturing sector. If you think about the typical pattern of industrial development, a country’s economic structure gradually shifts from agriculture to manufacturing and later to service industries like IT. But the order has been reserved in India because of its extremely poor infrastructure, along with a heavy bureaucracy and regulatory environments that are different in each region, which makes it hard for extensive transport networks to develop.

The result? India has largely skipped the manufacturing stage before its IT and service industries boomed. Now the service sector accounts for nearly 70 percent of the nation’s economy, followed by agriculture and manufacturing sectors by similar amounts. That means there is still far bigger space for Korean manufacturers to explore, although a lot of conglomerates like Hyundai and LG are doing well already.

What Korean companies are faring well there?

LG Electronics is doing extremely well in the country after entering the market in 1996 and is currently the leader in various home appliance segments - TV, air conditioners, refrigerators, microwaves and washing machines. Hyundai Motor now has about a 20 percent market share in the Indian auto market, while Samsung Electronics is the leader in the LCD TV segment.

LG Electronics has been particularly very aggressive in sales, with its first regional head, Kim Gwang-ro, well known for having visited each and every rural county with a truck full of LG appliances and gadgets and with his bag full of diarrhea drugs and chapati (Indian flat bread) because his stomach couldn’t handle the exotic food there. Most foreign companies rely on the country’s regional distribution networks to sell products, but there were few nationwide networks.

But LG managed to establish its own nationwide distribution system with its grassroots sales efforts. LG also rolled out a series of products customized for the local market. For instance, it was the first company to make refrigerators with a key lock, since many Indian households have housemaids and some wanted to prevent the maids from stealing food from the refrigerators.

Any pitfalls for Korean companies trying to enter the market?

For one thing, when you’re doing businesses in India, you should never underestimate the skills of local merchants in India. They are mostly from the Vaishya caste, made up mostly of merchants or artisans. These people have been merchants for generations and thus extremely talented and skillful businessmen and negotiators. Some Korean businessmen mistakenly believe that they can simply take over when they enter markets in developing countries, but not in India. The whole country is extremely diversified in terms of ethnic groups, languages - they have 18 official languages and many religions and social customs.

Each province has its own customs and regulations that are vastly different from each other so each province is almost like a different country. So you need to thoroughly know the customs, investment regulations and other laws before tapping into the Indian market, which is quite daunting for small and midsized Korean companies with limited resources. My research center strives to provide such information and consulting services. We have hired 50 Indian economists and industry analysts currently working in India and have ties with leading think tanks.