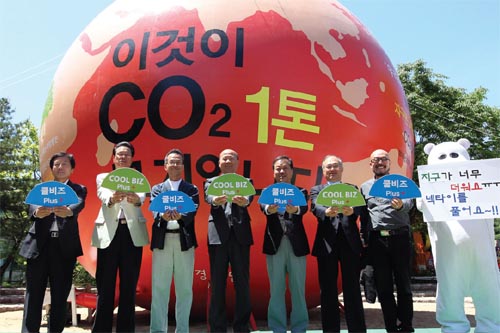 Supporters of the Cool Biz+ Campaign, an effort initiated by the Korea Green Foundation, pose in front of a balloon at Seoul Land theme park in Gwacheon yesterday. The annual campaign encourages people to do away with ties and jackets, which the foundation says will reduce carbon dioxide emissions. The balloon symbolizes one ton of carbon dioxide. Participants included Minister of Environment Lee Man-ee (fourth from left). [YONHAP]