Final friendly gives Korea a chance to learn from the best

Final friendly gives Korea a chance to learn from the best 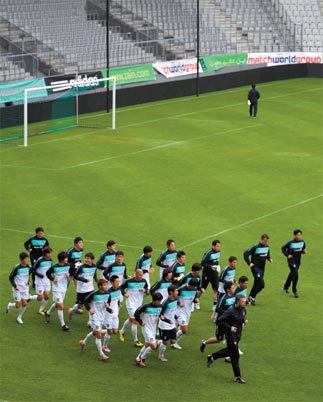 The national football team heads out for practice at the Tivoli Neu stadium in Innsbruck, Austria, yesterday. [NEWSIS]

It’s always best to know your shortcomings before the big games, and the national football team’s coaching staff is banking on a tough opponent to teach them a lesson or two.

Korea is ready to take its final preparatory exam tomorrow at 1 a.m., Korea time, when it faces off against Spain in Innsbruck, Austria. The friendly match against the world No. 2 will be a big challenge for manager Huh Jung-moo and his squad, but one that could pay off with knowledge they can use in the World Cup.

In playing the 2008 Euro Cup champs, the Korea players will have an opportunity to test themselves against a well-rounded team that many have tabbed to reach the finals of the 2010 games in South Africa. It’s also the first match since the coaching staff announced its 23-man final roster, and Huh and his men will approach the game as a tune-up for Argentina, their Group B opponents. 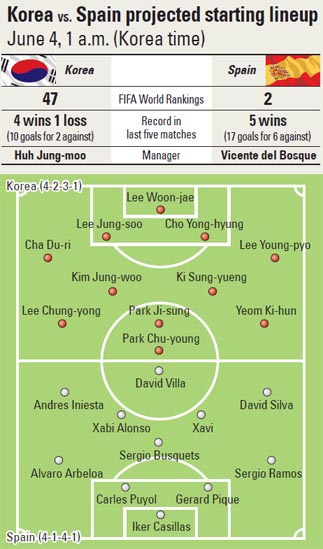 “The question is whether we can contain the Spanish offense, which boasts many individually talented players, and follow through with quick counterattacks.”

To focus on containing Spain’s offense, Huh is expected to stray from his usual two-forward formation in favor of using one forward and five midfielders. Captain Park Ji-sung will be in charge of stopping the opposing team’s top player, and will also take on the role of key playmaker as he distributes the ball to the two wingers, Lee Chung-yong and Yeom Ki-hun, and forward Park Chu-young.

“We’ve worked hard and we will test ourselves against Spain to see how far we’ve come,” said Park Ji-sung.

Coming up against the captain will be forward David Villa of Barcelona. Listed at 175 centimeters (5 feet, 9 inches), Villa is a dangerous player who has recorded 37 goals in 56 international appearances for Spain since 2005. While he lacks the typical size of most dominant forwards, Villa has the speed and skills to score in bunches, and is currently on a three-game scoring streak.

The energetic Korean midfielders are the key to the national team’s defensive strategy. Spain breezed through the regional qualifiers by winning all 10 of their matches, and also won their past 10 games. The backbone of the Spanish squad is a five-man midfield unit consisting of Andres Iniesta, Xabi Alonso, Xavi, David Silva and Sergio Busquets. Cesc Fabregas is on the injured list along with forward Fernando Torres, and is not expected to dress for the game.

“Spain uses a formation featuring five midfielders. We’re going to need to increase our number of midfielders to contain the opposing team. We need to find ways to incorporate counterattacks in our defensive scheme,” said Huh. “Things might not go our way and we might struggle, but those difficulties will work to our favor as we prepare for the World Cup. If we stick to our game plan and play with confidence, we can net good results.”

The only forward who has secured a starting spot on the national team is Park Chu-young. Lee Dong-gook is still about a week away from team training and Huh is expected to give Lee Seung-yeul and Ahn Jung-hwan some playing time in the second half.