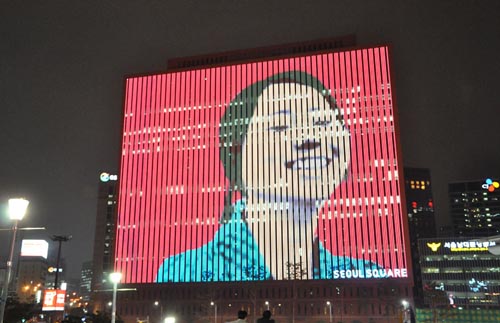 Gana Art’s media facade project celebrates the 2010 World Cup with a video that can be seen every night until June 20 on the Seoul Square building in central Seoul. Provided by the gallery


Big sports events such as the upcoming 2010 South Africa World Cup tend to keep fans of the arts away from theaters and exhibitions, but this year the culture industry seems to have decided that it is better to utilize the big event in their marketing strategies rather than try to fight it.

The National Museum of Korea in Ichon-dong, central Seoul, plans to offer its visitors a chance to support the national team players as they appreciate art. On the day of the match between Korea and Greece, visitors can get a 50 percent discount off the price of admission for the ongoing special Greek sculpture exhibition “Gods, Heroes and Mortals: Art and Life in Ancient Greece.”

The museum will also install a big outdoor screen so that up to 2,000 visitors can stay and watch the game. In addition, celebrities and singers are scheduled to appear to help museumgoers cheer the players on.

Gana Art Gallery in Pyeongchang-dong, northern Seoul, will hold an exhibition called “2010 Art in World Cup” from June 11 to 24. The 12 artists participating in the exhibition created paintings, sculptures and installations that reflect the excitement of previous World Cup games.

The gallery will also hold a special cheering event on the day of the match between the Korean and Greek teams. Before the game starts, visitors will be treated to performances by well-known artists such as painter Sa Suk-won, who will create a painting related to the World Cup on the spot in front of the audience. The game will then be shown on an outdoor screen installed on museum grounds.

In addition, the gallery engaged media artists to create a video montage that incorporates the faces of ordinary soccer fans and their messages of support for the national team. The video will be shown on the giant media facade of the Seoul Square building across from Seoul Station every night from Tuesday until June 20. The media facade will also show the match with Greece.

Not to be left out, movie theaters will show the World Cup games on the dates the Korean team is scheduled to play. The Lotte Cinema, CGV and Megabox multiplexes will show the games in 2-D and 3-D on more than 300 screens around the country.

To enlighten readers with more in-depth World Cup trivia, bookstores are marketing publications focusing on the history of the competition and the Republic of South Africa, which is the first African country to host the World Cup.