Nature finds a way to survive in the city

Nature finds a way to survive in the city 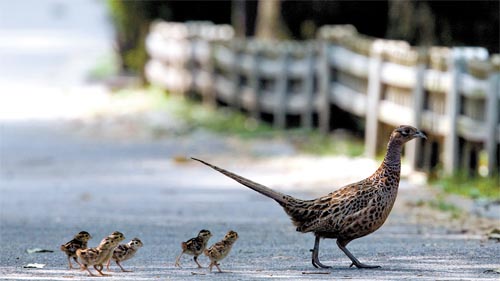 A hen pheasant walks with its chicks on Mount Namsan, central Seoul. By Cho Yong-chul

Seoul is not exactly a wilderness. The city of 10 million is one of the world’s most densely populated, and it’s hard to believe that just a century ago, tiger attacks were a real concern on the outskirts of Korea’s capital.

But it’s hard to keep Mother Nature down, and there are places one can still go to see Seoul’s remaining wildlife. Of course, as Han Bong-ho, a professor of landscape architecture at the University of Seoul, says, “Human beings are animals themselves.” Thus, anywhere humans can survive, the environment must be suitable for a least a few species of our brethren in the animal kingdom. “We need to coexist with the wild animals, and taking care of them is our responsibility,” Han said.

Many areas in Seoul are becoming more friendly to wild fauna as an increasing number of people recognize the importance of preserving the oases of nature amid the urban sprawl. Meanwhile, the Seoul city government is working to secure Ecological Reserves or Preserved Natural Scenic Areas around the city to allow wild animals and plants to survive on their own. There are currently four ecological parks in Seoul, and it plans to establish four more by 2014.

The JoongAng Sunday, an affiliate of the JoongAng Daily, dispatched a special reporting team to witness the results of these efforts in person, along with professional scientists and members of the civic organization, the Wild Animal Group, and they weren’t disappointed. Three different groups visited three main habitats in Seoul: the West River Swamp, Sangam World Cup Park and Tancheon. 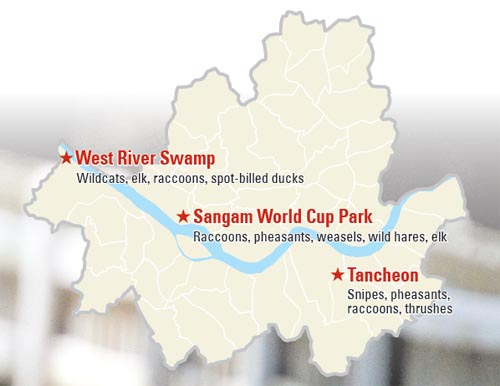