Once a dump for human refuse, today a pheasant’s paradise

Once a dump for human refuse, today a pheasant’s paradise 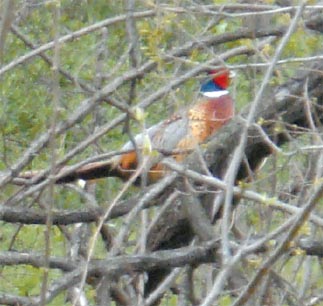 A pheasant perches on a tree in World Cup Park.

Sangam World Cup Park was the second team’s destination. At 5 p.m., after seven hours of wandering around the park without seeing a single wild animal, we heard a flapping noise.

“It’s a pheasant,” said one of the team members. But the cock and hen were already flying away, after sensing someone approaching. Still, it was a jaw-dropping experience for a group of city reporters who had only seen pheasants inside cages. As if on cue, more pheasants came into view. Then raccoons began to reveal themselves - another favorite for their cute faces.

This beautiful park was once a landfill, but it has been meticulously restored, and today around 900 different species of wild animals and plants live here. Patient visitors will be able to see raccoons, weasels and elk - though judging from Park Manager Kim Jong-chan’s boast that an elk had been caught on CCTV last April, it seems sightings are not exactly frequent - especially since elk can smell humans at 2 kilometers (1.2 miles) away. Even the staff at the park confess they haven’t seen any in person yet.

Seven cameras have been installed in World Cup Park to monitor the wildlife and make sure they are able to find food successfully. Log bridges were also placed over the roads to allow small animals to cross, and the shrubs around the park are perfect hideouts for these small creatures. 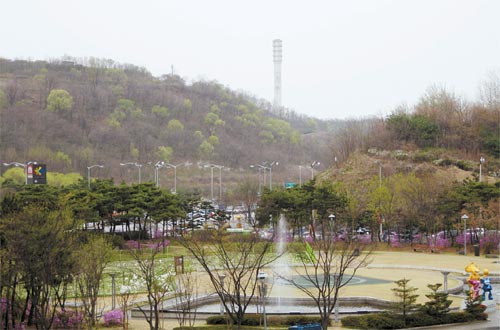 The park was a landfill for 15 years but became a large ecological park, above, during the 2002 World Cup. It’s located in Sungsan-dong, Mapo District. [JoongAng Ilbo]

Here and there, signs are posted warning hikers to look out for wildlife. The park is big enough that it actually contains multiple habitats. Birds are easier to find. According to 2008 research data, 55 varieties of birds inhabit World Cup Park, with many of them designated as protected species.

Experts say that the World Cup Park is a relatively friendly place for avian life. Lee Woo-shin, a professor of forestry at Seoul National University, said that prey, nesting grounds and water are essential preconditions for birds to survive.

“Above all, having water nearby is a must for birds as they need to clean their feathers in order to fly,” Lee said.

All of these conditions are present at Sangam, where the team saw about six pheasants near Hongjae Stream.

Unfortunately, the park’s popularity has led to some problems. “The raccoons here are especially obese as visitors feed them too frequently,” Lee said.

Many dangers still threaten animals even in wildlife preserves. Another team member later in the day happened upon a raccoon that looked as though it had been dead for at least a month, while walking along the Tan Stream in southern Seoul (below).

It was a gory scene, with some of the 30-centimeter (1-foot) animal’s innards still visible. Jang Seul-ah, a member of the Wild Animal Group who joined the team’s exploration, commented that wild animals can die of even the slightest scar, as they easily develop infections. Wild raccoons can even die of skin problems. A meter away from the dead raccoon lay its hideout, made of grass and pampas.