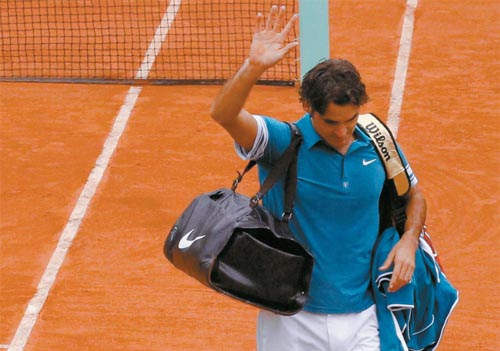 Roger Federer leaves the court after losing his match against Robin Soderling during the French Open on June 1. [REUTERS/YONHAP]

PARIS - There will be a Grand Slam semifinal without Roger Federer for the first time in six years.

The shocker was the second pulled off by Soderling in as many years at Roland Garros. He ended the reign of four-time champion Rafael Nadal in the fourth round a year ago, clearing the path for Federer to win his first French Open title and complete a career Grand Slam.

Federer beat Soderling in last year’s final. Before Tuesday, Federer was 12-0 against the big-swinging Swede, winning 28 of their 30 sets. But Soderling’s recent improvement was evident as he controlled rallies from the baseline with his thunderous strokes. Federer found himself on the defensive and unable to move forward.

Seeded fifth, Soderling saved a set point in the third set when he won a frantic rally, then won the set to take the lead shortly after a rain delay of 75 minutes.

“It cannot be much better,” Soderling told the crowd after his latest center-court stunner. “It’s great to play on this court. It’s for sure my favorite Grand Slam.”

The semifinal round tomorrow without Federer will be the first at a Grand Slam tournament since he lost in the third round of the 2004 French Open.

Because of Federer’s defeat, Nadal will reclaim the No. 1 ranking next week if he wins the title. The upset raises the possibility of a Nadal-Soderling rematch in the final. It was a cold, damp afternoon, with occasional rain, but the conditions didn’t seem to rob Soderling’s shots of any sting. He hit winners past Federer even standing two strides behind the baseline. The upset was all the more surprising because Federer was in control early. He won 22 of his first 24 service points and led 30-love in his first service game of the second set when he suddenly faltered, losing four points in a row.

A backhand wide by Federer gave Soderling his first break, and he held serve the entire set to even the match. It was the first set Federer had dropped in the tournament.

Soderling made a narrow escape to extend the third set serving at 4-5. Trailing love-30, he hit a forehand that was called wide, but the umpire climbed off his chair, checked the mark and ruled the shot a winner. Instead of love-40 and triple set point for Federer, the score was 15-30.

Then, at 30-40, Soderling erased the set point in a wild exchange. He charged forward and hit a slam that Federer scrambled to chase down near the backstop, stretching to whip it back, and Soderling leaped to put away an over-the-shoulder backhand volley.

The crowd roared with delight. Federer looked very unhappy. Soderling then whacked back-to-back service winners of 139 and 138 miles per hour to hold for 5-all. It was the second consecutive service game he won after trailing love-30.

Rain prompted an untimely delay in the middle of the next game. At that juncture, Federer led by one point after 167 had been played. The match resumed on a drab evening in a half-empty stadium, and the remaining fans were firmly in Federer’s corner.

But he promptly lost his serve, double-faulting before Soderling whacked a forehand winner for the break. When Soderling hit an ace to seal the set, Federer waved his arms as though helpless. On match point, Soderling hit a second serve that Federer couldn’t put in play.

Soderling improved to 5-18 against players ranked in the top three. His only other major semifinal berth was at Roland Garros a year ago.

“I’ll tell you the truth: I can’t grasp the historical nature of what I did,” Schiavone said. “But the importance of this victory, in itself? Yes. ... I’m enjoying it so much. When you work a lot, hard every morning, every afternoon of your life, and arrive at a good result, I think you feel much more.”