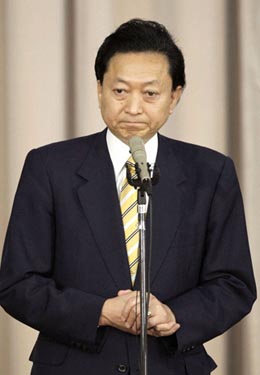 Korean government officials believe the double resignations aim to give the Japanese Democratic Party better standing in the upper parliamentary elections on July 11, but will also impact relations between the two countries.

“Difficulties may arise in the development of the two countries’ relationship, because Japanese politics are in limbo due to four prime ministers quitting over the past five years,” a Korean government source said.

Free-trade negotiations between Korea and Japan may stall due to Japan’s fluctuating political circumstances, analysts said.

“A shake-up was inevitable for the [Japanese] Democratic Party to maintain the status quo for the July elections, because of their slacking approval ratings. But just because Hatoyama and Ozawa are resigning doesn’t mean their stake in Japanese politics will be wiped out,” another Korean government official said.

He added that, “The Japanese Democratic Party has always taken the relationship between Japan and Korea seriously, so bilateral relations will not deteriorate too much.”

Officials said Hatoyama’s abrupt exit was a disappointment, as he had been active in seeking solutions to historical problems stemming from Japan’s occupation of the Korean Peninsula.

The Korean government said it would keep an eye on the changing situation, as well as on the men likely to succeed Hatoyama, current Finance Minister Naoto Kan or Infrastructure and Transport Minister Seiji Maehara.