Opposition bounces back in polls

Opposition bounces back in polls


The Grand National Party was locked in a battle royal against the allied liberal opposition candidates for the nation’s 16 metropolitan mayor and provincial governor posts, according to an exit poll released by Korea’s three major broadcasting networks.

Contrary to opinion poll results printed before the campaign, the opposition parties made a strong showing thanks to a high voter turnout, including a large youth vote, which is generally pro-liberal parties.

The outcome of yesterday’s elections is also seen as a midterm evaluation of President Lee Myung-bak’s government. The ruling GNP had hoped that older, conservative voters, worried about the national security crisis caused by the sinking of the naval ship Cheonan in March, would deliver them a landslide.

The Seoul mayor race was a near-tie between Oh Se-hoon, the incumbent Grand National mayor of Seoul, and the Democratic Party’s Han Myeong-sook, who had the backing of other minor liberal opposition parties. The exit poll showed that 47.4 percent of the voters said they selected Oh, while 47.2 percent said they voted for Han.

In Gyeonggi, Kim Moon-soo, the incumbent governor affiliated with the Grand National Party, was leading the race against Rhyu Si-min of the People’s Participation Party. Kim was backed by 52.1 percent, while Rhyu was supported by 47.9 percent, according to the exit poll.

The big surprise came in Incheon, as the DP’s Song Young-gil was ahead of current GNP Mayor Ahn Sang-soo, an outcome not predicted by opinion polls conducted before the elections. While Song led the exit poll with 51.1 percent, Ahn was backed by 45.5 percent. 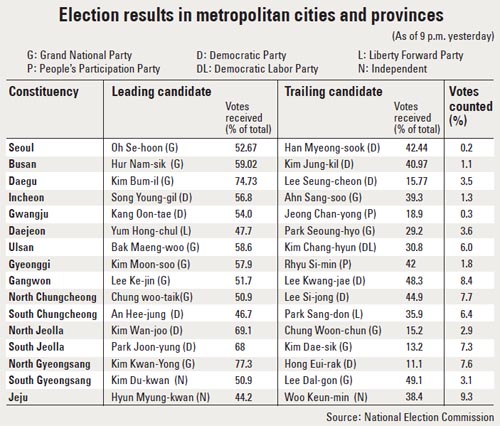 In Gangwon, the DP’s Lee Gwang-jae was ahead of the GNP’s Lee Ke-jin. The exit poll showed that Lee Gwang-jae, a confidant of the late president Roh Moo-hyun, was backed by 53.4 percent, and Lee Ke-jin was the choice of 46.6 percent

The DP also was on a roll in South Chungcheong, a traditional stronghold of the Liberty Forward Party. An Hee-jung of the DP was ahead of the LFP’s Park Sang-don.

The Chungcheong-based Liberty Forward Party was leading in Daejeon.

In South Gyeongsang, Kim Du-kwan, an independent candidate and a close confidant of the late President Roh, led against the GNP’s Lee Dal-gon. According to the National Election Commission, the turnout was 54.5 percent, the highest ever since local elections first took place in 1995.

According to the National Election Commission, the races in key districts got tighter at the end of the campaign, stimulating voters’ interest.

The Democratic Party even put up a good fight in Incheon, South Chung-cheong and Gangwon - areas in which it has never won.

The opposition parties’ strategy of forming a political alliance in which they backed single candidates in races also proved powerful, and the rise of the so-called 386-generation politicians - associated with former President Roh - is also a new development.

The liberal candidates appeared to crush the Grand National Party’s attempt to score a third local elections victory in a row. The GNP won 12 out of 16 top posts in the 2006 local elections and 11 in 2002.

Months ahead of the elections, Lee’s four major rivers project and the debate over a free school meal program were key campaign issues, but they became insignificant after the Cheonan sank on March 26. The first anniversary of former President Roh’s death on May 23 was also expected to be a political event to unite liberal voters, but it was shadowed by the announcement of the international probe on May 20 that the Cheonan was destroyed by a North Korean torpedo attack.

The opposition parties were forced to form a campaign alliance and consolidate candidates to better their odds against the ruling party candidates. The move reshaped the elections as a competition between those affiliated with the Lee administration and others associated with the Roh administration. The liberal candidates for Seoul, Gangwon, South Chungcheong, Gyeonggi and South Gyeongsang were all key Roh aides.