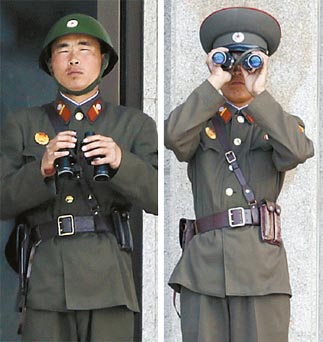 A North Korean guard, left, in the Joint Security Area at Panmunjom is seen wearing a helmet yesterday. North Korean soldiers there had previously worn hats, as seen on the right in a picture taken on May 26. Military officials suspect the North’s military alert may have been raised. [REUTERS]

South Korea and the United States will carry out a joint naval drill next week, about a month ahead of schedule, military officials here said yesterday.

The exercise, to be held from June 8 to 11, will “demonstrate the strong willingness by both Seoul and Washington to deter North Korea” from further military provocations, officials added.

The exercise will take place off the west coast near Taean, South Chung-cheong, and Pyeongtaek, Gyeonggi. One official said the drill will also help the navies prepare for potential North Korean military reactions to any United Nations Security Council punitive measures.

Another official said a second round of exercises will take place later this month near Baengnyeong Island in the Yellow Sea, where the Cheonan sank.

North Korea was declared on May 20 to have been behind the sinking of the South Korean warship on March 26. As part of its response, Seoul earlier said the joint naval exercise would take place in late June or early July. President Lee Myung-bak vowed “proactive deterrence” against Pyongyang.

According to another official, the U.S. forces will mobilize their nuclear-powered, 97,000-ton carrier, the U.S.S. George Washington, plus an Aegis destroyer and a nuclear submarine. South Korea will deploy a 4,500-ton destroyer, a submarine and F-15K fighter jets.

North Korea has threatened to stage “all-out war” for any sanctions over the Cheonan sinking and to scrap an inter-Korean pact designed to prevent naval clashes off the west coast.

In another sign of heightened tension, the United Nations Command here said North Korean guards in the Joint Security Area at Panmunjom have begun wearing helmets in place of hats. A command official said the soldiers first donned helmets on May 27. North Korean guards there are armed with small firearms. Another Korean military official said the North appears to have raised its military alert.