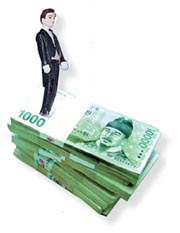 Kim Dae-wu and Maeng Min-kyung were in love and ready to form a partnership for life. Luckily, when they finally got married last April, the couple had enough cash to get through it.

“The thing we spent most on was renting our house,” Maeng said in a recent interview. “Getting a car, buying rings and watches were the other big expenses, in that order.”

It takes a tidy amount of moolah to tie the knot in Korea. According to a recent survey by Incruit, Korea’s leading online agency for recruitment and human resources, Koreans think a man should have at least 130 million won to get hitched while a woman should have 56 million won. Compared to the survey, Kim hovers around the average, while Maeng’s spending was over.

“A man’s budget is about twice that of a woman’s,” Incruit said. “There is a general notion that the economic burden on men when they get married is much greater than that for women. This survey supports that.”

The survey was conducted on some 460 Korean workers in their 20s and 30s.

The biggest concerns about getting married, according to the survey, were finding a house (said 43 percent of the respondents), family planning and child care (30 percent), and balancing homemaking and career (12 percent).

“Finding a house - whether buying it or taking it by lease - was the hardest part,” said Kim Hyung-moo, who got married in April.

“We were lucky enough to find a house that suited our budget and other criteria, but many couples we know haven’t been able to even though their marriage dates are just around the corner,”