World leaders sit at the round table at the G-20 Summit in September last year in Pittsburgh, United States. [JoongAng Ilbo]

The talk of the town in this southeastern port city this week is the meeting of finance ministers and central governors from G-20 member countries, which began yesterday and concludes tomorrow.

U.S. Treasury Secretary Timothy Geithner, European Central Bank Governor Jean-Claude Trichet, Chinese Finance Minister Xie Xuren and International Monetary Fund Managing Director Dominique Strauss-Kahn - a who’s who of the world’s economic and financial leadership, along with more than 200 deputies and aides - will crowd into the Westin Chosun Hotel on Haeundae Beach as the week wears on for meetings and forums.

To provide security, more than 600 Busan police officers, special commandos and Coast Guard troops are patrolling the neighborhood and sea nearby, all part of Korea’s yearlong mission to showcase its status as a coordinator of the group of major economies.

But after the pomp and circumstance, what exactly will the world’s most powerful bankers and financial regulators talk about? Much of the agenda may sound at first glance like nothing more than vague, lofty rhetoric, but some items will likely take firmer shape down the road after more rounds of haggling leading up to the main G-20 Summit in November in Seoul. The consensus to come out of the conference in November will likely influence the policy of many member countries, perhaps even affecting the fate of their economies, financial industries and ordinary citizens.

“This way the ministers can exchange their ideas more freely in an informal manner,” said Choi Hee-nam, policy strategy bureau director general of the Presidential Committee for the G-20 Summit. The first session, titled “global economy,” will be dedicated to discussing each country’s exit strategies, or how and when they plan to roll back the extraordinary fiscal measures and rock-bottom interest rates used to fight off the global recession. The ministers and secretaries will also discuss their countries’ fiscal health in light of the sweeping crisis in the euro zone.

The second session begins tomorrow morning at 8:30, and the main theme is, “a G-20 framework for strong, sustainable and balanced growth.” During the two-hour session, the IMF will first lay out its own best- and worst-case scenarios for the global economy down the road, to help policy makers devise their best post-crisis options. 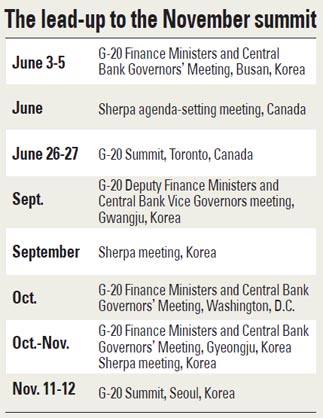 The third session from 10:45 a.m. to 12:45 p.m., will focus on financial regulatory reform, will likely stoke the liveliest debate as it is full of potentially contentious issues that will have immediate impacts on the everyday operations of global finance.

Goals for the session include how to tax high-risk transactions at big financial companies and build up reserves for future bailouts, how to overhaul operations of hedge funds and global credit raters like Moody’s Investors Service and Fitch Ratings.

In particular, the idea of taxing big financial companies - commonly called a “bank levy” - has taken center stage in G-20 debates in recent months, with the impact of such a measure likely to be felt by local banks and their customers. One idea under consideration is taxes on big financial companies’ nondeposit liabilities, while another involves slapping a so-called “financial activities tax” on profits and executive bonuses.

There has been little consensus on how to use the taxes once they’re collected.

For instance, countries such as Sweden and Germany support a dedicated international fund to rescue banks during future crises so that taxpayers will not have to foot the bill for costly bailouts. Britain and France, while agreeing on the need to build up reserves for future bailouts, want to direct some of the money to the national treasury. And Washington is most likely to collect the money only to recoup its past spending for bank bailouts in 2008 and 2009.

But these disagreements may end up as minor squabbles compared to the issue of whether to impose such taxes to begin with. Currently the United States and Britain, which experienced costly bank bailouts and taxpayer backlash, are the most vocal proponents of the idea.

But countries like Canada, Australia and several other emerging economies in the G-20 argue that their banks were not culpable for the recent financial crisis and see little political incentive to punish them.

Korea has been on the fence in this regard, with Seoul officials occupied with their role as quiet coordinator of the debate before the Seoul G-20 Summit in November.

The fourth session from 1 p.m. to 2 p.m., on “international financial reform and global financial safety nets,” also has the potential to trigger heated debate, because it deals with voting quotas in the International Monetary Fund and how to change IMF policy so it can react more quickly to sudden currency crises. Seoul has been particularly active on the issue of a stronger regional safety net in Asia to stop emerging countries from hoarding massive foreign reserves despite complaints from advanced economies. Korea, with the catastrophic 1997-98 Asian currency crisis still lurking in the national memory, is also pushing the IMF to offer aid to Asia’s regional emergency currency swap pool, known as the Chiang Mai Initiative.

“The IMF’s position is it can only offer aid on a country-by-country basis, not on a regional basis .?.?. but having a reliable financial safety net can make great contributions to emerging economies, leading them to implement policies more reliably,” said Korea’s Finance Minister Yoon Jeung-hyun on Tuesday. “This idea, called the Korea Initiative, is going to be one of the most important agenda items during the G-20 Summit.”

Tomorrow’s final session from 2:30 to 3:30 p.m. will be dedicated to discussing other miscellaneous issues and signing off on a joint communique before Yoon holds a press conference about the discussions. Then all the policy makers will fly back home, to consider their options and formulate their interests as the June 26-27 G-20 Summit in Canada approaches, followed by five more meetings large and small until the November G-20 Summit in Seoul.