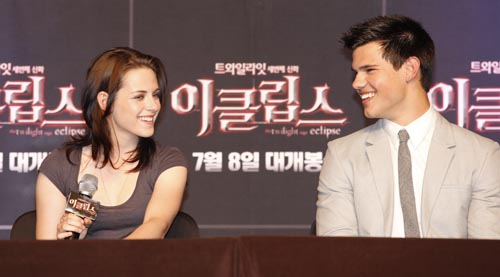 “Twilight” series stars Kristen Stewart and Taylor Lautner were in Korea yesterday to promote their new film, “The Twilight Saga: Eclipse,” the third film in the Twilight series. The film will be released on July 8 in Korea, after its June 30 release in the United States.

“It is a story for everyone, that anyone and everyone can relate to. It has action, romance, suspense and everything. I truly believe that the story is universal,” said Lautner.

Considering the series’ success, the third film is expected to eclipse the series record.

Lautner added that the pressure from the success of the two previous movies encouraged everyone on the set to work harder.

The stars shared their expectations about the movie and what they have learned through shooting the series at a press conference yesterday at the Shilla Hotel in central Seoul.

The first two Twilight movies came out in early and late 2009 and hit a record high in the movie industry by earning a combined $40 million worldwide through May, according to Pancinema, the film’s distribution company in Korea. The second film, “The Twilight Saga: New Moon,” made $7 million on its opening day, earning the highest profit in the history of the U.S. film industry, leaving the film “Dark Knight” (2008), the previous record-holder, behind.

The third film in the series will be darker and more serious and features a war between various vampire tribes and werewolves. In addition, the love triangle involving Bella (Stewart), Edward (Robert Pattinson) and Jacob (Lautner) will hit its pinnacle.

Stewart said that the scene where Bella and Jacob kiss on top of a mountain, without knowing that Edward is watching them, was the most memorable for her.

“It was such a different mind-set from the rest of the series. It was the line [Bella] finally crossed,” Stewart said, describing Bella as a “control freak.”

Stewart, who started acting at the age of 8, said that she has matured as an actress while shooting the Twilight series.

She once described what she does as “professional lying” in an article in Vanity Fair in 2007. At the press conference in Seoul, she tried to explain herself.

The actress also said that having a strong friendship with the actors who play the two other main characters and the rest of the crew on the set helped her understand the core of what she does for living.

Lautner, meanwhile, talked about his fitness regimen, which he stepped up after the first film in order to keep up with the physical changes his character goes through in the second film. Even for the two-day visit to Seoul, he requested a hotel with a full gym.

Recalling his hours at the gym, he said, “It was a lot of work crammed into about a year. Right now I’m finding it is just as hard to maintain what I put on in the first place.”

He sighed as he said he would have to keep up with his training until he finishes filming the fourth and last film in the series, “Breaking Dawn,” which is likely to be released next year.

Later in the day, Stewart and Lautner made an appearance on the red carpet at a Megabox multiplex in Samseong-dong to greet local fans.