Who will be crowned chicken champ?

Who will be crowned chicken champ?


With the 2010 World Cup approaching, a battle has begun - a battle between fried chickens. According to a recent survey by discount retail chain Lotte Mart, 57 percent of Koreans prefer deep-fried chicken over other snacks while watching football.

Of course, the country’s countless fried chicken restaurants are aware of Koreans’ appetite for greasy poultry and ice-cold beer during the World Cup, and they’re excited - and ready to duke it out for space in your stomach.

“It’s peak season for us because we see a more than 50 percent sales increase during soccer games, compared to non-game seasons,” said Park Yeol-ha, an executive director at Genesis BBQ, which operates a chain of fried chicken restaurants.

“Unlike the previous German World Cup, two games are being telecast in the afternoon, so it’s a big chance for us.” 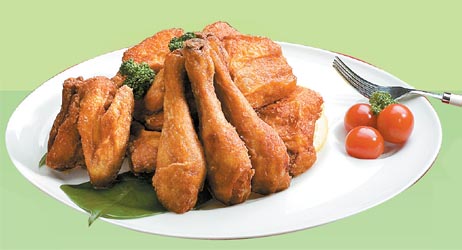 Lots of chicken in the ocean

So you’ve decided to clog your arteries and dim your judgment with chicken and beer. The next step is to choose a chicken joint. This is not a simple quest. The Korea Franchise Association estimates the country’s fried chicken market at around 4 trillion won ($3.6 billion) last year, with about 35,000 chicken franchises - excluding small and midsized independent fried chicken restaurants.

For chicken neophytes - or veteran greaseballs looking for something new this football season - here are the big names, and a few establishments you may have overlooked.

Of course, the typical Korean chicken experience takes place at BBQ, a franchise that started in November 1995 and has grown into the country’s largest. The chain claims to use extra virgin olive oil in its fryers, which it says contains less trans fat than other types of oil. Of course, extra virgin olive oil is also about seven times more expensive than other types of cooking oil, so BBQ’s menu runs a little more expensive than at other franchises. For example, a whole fried chicken costs 16,000 won, and a whole “yangnyum” (sweet and spicy) chicken is 17,000 won at BBQ, whereas elsewhere an entire bird usually starts at 14,000 won.

If you care about your health, but not enough to stop eating fried chicken, then olive oil might be an ideal choice, but those used to conventional recipes that include corn oil may complain that it tastes strange or heavy. In addition, extra virgin olive oil has a low smoke point compared to other oils - a vital consideration when deep-frying, a process that requires high temperatures. Still, the biggest virtue of BBQ is the quality of the bird itself, as the chain uses noticeably meatier chickens relative to other shops.

“Our most popular menu item is the original deep-fried chicken, known as Golden Olive Chicken,” said Park at Genesis BBQ.

If you are in the mood for something more “Korean” in taste, head for a Kyochon Chicken outlet.

Once just a hole-in-the-wall in Gumi, North Gyeongsang, Kyochon Chicken spread across the nation on word of mouth about its special sauce recipe. The company celebrates its 20th anniversary next year.

Kyochon Original is the concoction that got Kyochon Chicken where it is today.

“We can’t tell you exactly what we put into the sauce, but soy sauce and crushed garlic are the main ingredients,” said Lee Hee-jeong, an official on the public relations team at Kyochon.

There seem to be two camps about that sauce - some love it, some find it way too salty - but Kyochon claims it has global appeal, because it’s already launched seven stores in the United States, including one in Manhattan, and another store in Shanghai. Kyochon also offers fiery hot chicken using Korean red hot pepper powder, called Kyochon Red Original. The level of spice seems to vary, but for those who don’t go looking specifically for tongue-burning thrills, it may be a little too intense. 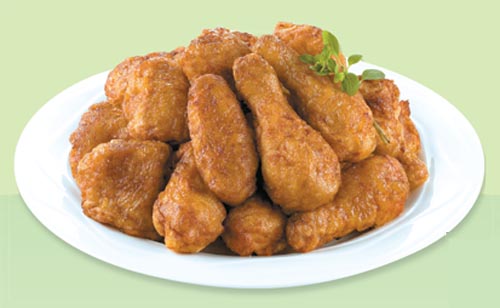 Two Two Fried Chicken is the oldest local brand, with its first store opening back in 1978 under the name Zela Chicken in Myeong-dong, central Seoul. What sets Two Two apart is the batter - or lack thereof. The light coating lessens the (ahem) impact of the meal, and those with weak constitutions may find it easier to munch down more wings and drumsticks at Two Two.

“For this reason, Two Two often serves three drumsticks or three chicken breasts in order to serve about 1,000 grams of fried chicken to our customers,” said Jung Soo-hyun at the company.

At Nene Chicken, a funky menu item called “Padak,” which combines the Korean words pa (green onion) and dak (chicken), is most popular.

“In fact, Padak is a widely-beloved item because a thick layer of pa gets rid of the greasy taste of fried chicken,” said Cha Young-su, a head of the public relations team at the chicken franchise. Its devotees have even opened blogs about the product.

Of course, fried chicken is very high in cholesterol and sodium, which can both lead to serious heart problems, and fat calories. The health-conscious might want to go for an oven-baked chicken instead, the newest trend in the industry.

Of course, doctors say too much chicken - especially during late-night football matches - is a health risk, both in the long term and more immediately.

“If you eat too much meat, such as deep-fried chicken, after dinner along with alcohol, it could cause stomach problems,” said Lee Hyang-rim, an internal medicine doctor at Seoul Bukbu Geriatric Hospital.

“As substitutes for meat, salad, tofu or tomatoes would be good late-night snacks.”

These options will have to do for vegetarians, too, since there aren’t usually any meatless alternatives to fried cluckers available at local chains. 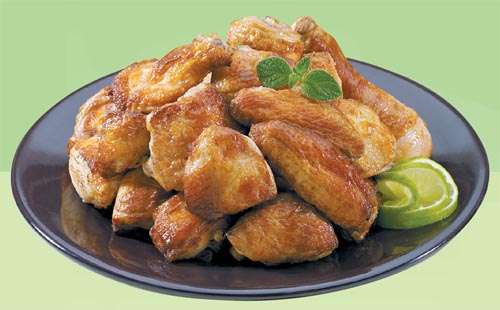 Do the chicken endorsement dance

A pop idol group isn’t considered to have truly “arrived” in Korea until they have a fried chicken endorsement deal. Since the nation’s fried chicken market is very saturated, each franchise works hard to draw customers by hiring A-list idol groups to speak on their behalf. Wonder Girls, the first Korean band to break into the U.S. Billboard Hot 100 Singles chart with “Nobody” in October last year, used to promote BBQ. The franchise recently signed another group, BEAST, to replace them. Super Junior speaks for Kyochon Chicken, Girls’ Generation for Goobne Chicken, KARA for COB and T-ara for Nene Chicken.