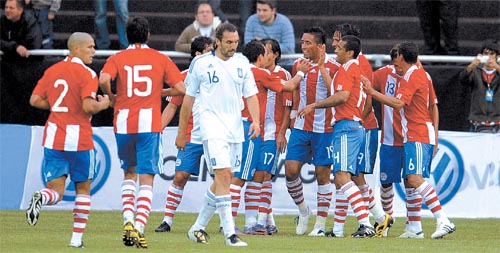 Paraguay players celebrate after Lucas Barrios’s goal in the 25th minute of the friendly against Greece in Winterthur, Switzerland, yesterday.

Greece’s final friendly match against Paraguay did not provide the national football team with a clearer picture of what they can expect in their 2010 World Cup opening match. With manager Huh Jung-moo and his coaching staff looking on from the stands, Greece played a lackluster game and lost the match 0-2 in Winterthur, Switzerland, early yesterday.

Coming off a 2-2 tie against North Korea on May 26, Greece failed to showcase their signature stalwart defensive game. The speedy Paraguayan side was in charge from the start and took the lead after Enrique Vera tapped in a rebound in the ninth minute of the match. Lucas Barrios added another in the 25th minute.

The Greek defense looked unorganized and slow-footed against the active Paraguayan midfielders and forwards. The Greek offense, which relies heavily on counter attacks, failed to create many chances and lacked creativity. Sotiris Ninis and Georgios Samaras connected on a few plays down the right side of the pitch, but other valuable chances failed to materialize.

“The results of our opening match against Peru will be different,” manager Otto Rehhagel said in an interview with the Greek media. “Our players were asleep during the first 20 minutes of the match. Our team’s play improved in the second half but today’s match was a disappointment. We still have some time and I am well-aware of our team’s problems.” 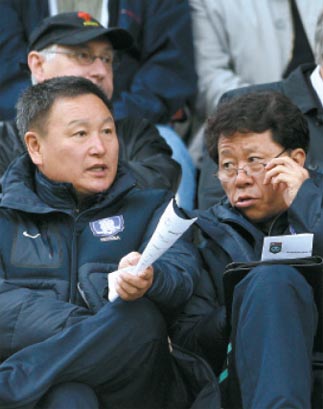 Huh Jung-moo, left, watches the game from the stands with his assistants. [NEWSIS, YONHAP]

Huh seemed just as displeased with the match as Rehhagel was. Having made the four-hour trip from Neustift im Stubaital, Austria, the Greek team’s lineup and playing style was different from the scouting DVDs he had been watching over the months. Key regulars were missing from the starting lineup and hence, the strategy and playing style of the Greeks were also altered.

“Greece is still preparing for the World Cup. Theofanis Gekas, Giorgos Karagounis and Vangelis Moras were all missing from the lineup,” said Huh in a post-match interview. “It’s difficult to assess Greece’s real game plan from the match.”

Despite coming away feeling unsatisfied with the scouting trip, not all was lost as Huh got a preview of some of Greece’s strengths.

“Overall, the Greek squad has a lot of strength. Their physical play today left a strong impression,” Huh said. “Instead of merely sticking to crosses from the sidelines on offense, the Greek players forged ahead with some good passing work on many occasions.”

Huh declined to comment on the Greek fullbacks who seemed to lack movement and allowed the opposing players to venture in at close-range.

Meanwhile, the Korean national team still has several players vying for vital roles on the team. One of the most interesting battles involves the forwards. Park Chu-young has secured the starting forward position and will be used as the lone forward in some instances but in formations featuring two forwards, either Lee Dong-gook or Yeom Ki-hun will be inserted into the lineup. Huh is expected to use two forwards in the opening match against Greece on June 12 and Yeom currently looks to have the edge over Lee, who is recovering from a slight tear to his right hamstring. Yeom is an active player with the ability to penetrate the opposing defense on his own, and he can also provide potent left-footed kicks in free kick situations.

In addition, Ahn Jung-hwan and Lee Seung-yeoul are competing for the role of first forward off the bench. Huh is looking for a player who can provide a change of pace and threaten the opposing team in the second half. Ahn has a knack for scoring goals in key situations but the veteran forward is still in the process of improving his physical conditioning. Lee is still raw but has shown he possesses the speed and the shots to provide a spark off the bench in the latter stages of a game.

One of the mainstays in the midfield, center midfielder Ki Sung-yueng, has been struggling in recent weeks and veteran Kim Nam-il is now in position to challenge the Celtic FC midfielder in the starting lineup. On defense, Cha Du-ri’s “positioning and poor decision making of late” has Huh leaning towards Oh Beom-seok as the starting right fullback.

Captain Park Ji-sung was scratched from a friendly against Spain earlier today due to reoccurring pain in his right hamstring. Kim Jae-sung started in his place.