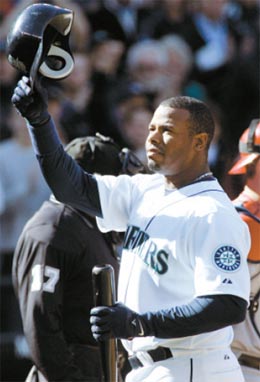 The 40-year-old Griffey told Seattle team president Chuck Armstrong that he was done playing. Mariners manager Don Wakamatsu called his players together before the start of batting practice to inform them of Griffey’s decision.

Griffey was not in the clubhouse before Wednesday night’s game against Minnesota. The team said he would not be at Safeco Field.

“While I feel I am still able to make a contribution on the field and nobody in the Mariners front office has asked me to retire, I told the Mariners when I met with them prior to the 2009 season and was invited back that I will never allow myself to become a distraction,” Griffey said in a statement.

“I feel that without enough occasional starts to be sharper coming off the bench, my continued presence as a player would be an unfair distraction to my teammates and their success as a team is what the ultimate goal should be,” he said.

Griffey was hitting only .184 with no homers and seven RBI this year and recently went a week without playing. There was a report earlier this season, which Griffey denied, that he’d fallen asleep in the clubhouse during a game.

Griffey was a 13-time All-Star outfielder and ranks fifth on the career home run list with 630. He won an MVP award and was an 11-time Gold Glover. The only thing missing on his resume was a trip to the World Series.

“It’s a sad day for the Mariners, our fans, for all the people in the community that have loved Ken, admired him as a tremendous baseball player and a great human being,” Mariners CEO Howard Lincoln said. “It’s always tough for great superstars like Ken or anyone else to make a decision to retire. This has been his life for so many years, but he has made his decision and we will support it. We will honor him in every way possible.”

A star from the time he was the overall No. 1 pick in the 1987 draft, Griffey played 22 years in the majors with Seattle, his hometown Cincinnati Reds and the Chicago White Sox. He hit .284 lifetime with 1,836 RBIs.

A year after making his big league debut, Griffey enjoyed one of his greatest highlights. Playing with his All-Star dad, Ken Griffey Sr., they hit back-to-back home runs in a game for the Mariners.

For a time in the 1990s, he was considered the best player in baseball.

And during the Steroids Era, his name was never linked to performance-enhancing drugs, a rarity among his contemporaries such as Barry Bonds, Sammy Sosa and Mark McGwire.