We can beat anyone, boasts Nigeria coach

We can beat anyone, boasts Nigeria coach 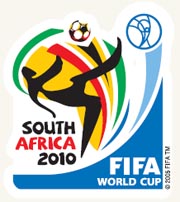 DURBAN, South Africa - Coach Lars Lagerback boasted that Nigeria can beat any World Cup opponent after the team arrived here Wednesday to prepare for the tournament.

“If we give 100 percent we can beat any team,” the Swede said after landing in this Indian Ocean city where the “Super Eagles” will plot the downfall of Group B rivals Argentina, Greece and South Korea.

Pundits expect two-time world champions Argentina to top the group under famous coach Diego Maradona with the race for the other place in the knockout second round wide open.

But Lagerback struck an upbeat note: “The Super Eagles are ready to take on the best in the world and we know there are high expectations, especially from our supporters.

“It has been wonderful since I took over. The attitude of the players has been great and we prepared well,” said the coach who replaced Shaibu Amodu soon after Nigeria finished third at the African Nations Cup last January.

Nigeria are scheduled to play a warm-up against World Cup rank outsiders North Korea in Tembisa east of Johannesburg on Sunday before facing Argentina on June 12 in their first group outing.