Mayoral race down to the wire to the last

Mayoral race down to the wire to the last


In one of the closest races in Korean history, Seoul Mayor Oh Se-hoon of the ruling Grand National Party secured his second term on Wednesday and became the first Seoul mayor ever to be re-elected.

Oh won with a narrow, come-from-behind victory over former Prime Minister Han Myeong-sook of the main opposition Democratic Party by a paper-slim margin of 0.6 percent.

The ballot counting for the Seoul mayor election was completed yesterday morning and Oh’s re-election was confirmed by the National Election Commission around 8:25 a.m.

Of the 4,397,672 votes cast, Oh, a 49-year-old lawyer-turned-politician, garnered 47.42 percent of the ballots while Han received 46.83 percent. The difference came down to just 26,412 votes. “Though I won this election, I had to look back upon myself deeply,” Oh said in a statement. “I will take today’s victory with a humble heart, because in reality, I was defeated in this election.”

As Oh counted his win as a loss, Han and DP members - including Chairman Chung Sye-kyun - greeted the final count with winners’ smiles.

“I, Han Myeong-sook, lost, but Seoul residents and the people won this election,” Han said at her campaign team’s disbanding ceremony at their headquarters in Yeouido, central Seoul. “The public rendered a verdict on President Lee Myung-bak and his administration in these elections. President Lee should read the people’s mind and accept their judgment humbly.” 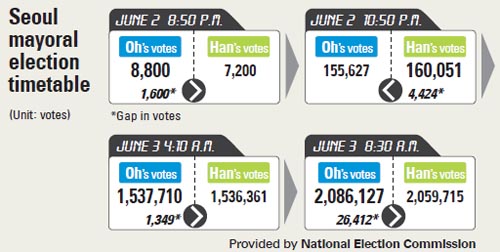 The Seoul mayor’s breathtaking race was the most dramatic of Wednesday’s contests for political observers, the ruling and opposition parties, and especially Oh and Han. The count was so close that a winner could not be declared until early yesterday morning.

Pre-election surveys had shown Oh leading Han by more than 10 percent, but the story turned upside down when exit polls aired by the three major broadcasters on Wednesday night showed Han was only 0.2 percent behind Oh - 47.2 percent to 47.4 - Oh’s campaign workers watched in shock and a cheer rose up at Han’s campaign office.

Han, who watched the vote count at home on television, visited her DP headquarters to meet her election campaign workers at 12:05 a.m. yesterday. Lee Hae-chan, co-head of the DP election camp, told her the count was drifting in her favor, and hinted that Han was likely to win the election.

Oh arrived at his own campaign headquarters at the Press Center at 1 a.m., about five hours later than expected. He told aides there that the public’s sentiment was scary, and shortly thereafter returned home.

Han maintained a 4,000-vote edge against Oh until 3:30 a.m., when his counterattack arrived in ballot boxes from three districts in southern Seoul - Gangnam, Seocho and Songpa. All three districts have historically heavily favored the GNP in elections.

At 4:10 a.m. yesterday, Oh finally outpaced Han by 1,349 votes, but he was again on the brink of losing 15 minutes later: Han was nipping at his heels, trailing by only 51 votes.

Though the gap in the number of votes continued to widen and narrow for another four hours, Oh maintained his unstable lead, and by 6 a.m. he was finally more than 20,000 votes ahead. At 8:30 a.m., he was declared the winner, with a 26,412-vote lead.

Political observers and Han’s supporters said Han would have become Seoul’s first female mayor if Roh Hoe-chan of the minor opposition New Jinbo Party had pooled his resources behind her. Roh won 3.3 percent of the ballot, or 143,459 votes. 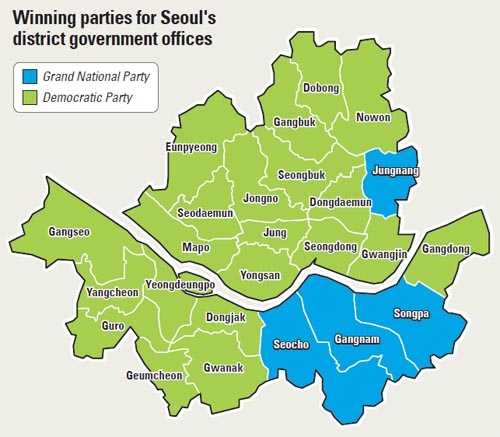