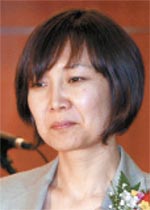 Lee Ra became the nation’s first foreign-born citizen elected as a proportional representative of the Grand National Party for Gyeonggi on Wednesday.

Lee, 33, became a Korean citizen in 2008 after following her Korean husband to the country from Mongolia in 2003. She is a well-known advocate for the welfare of multicultural families in Korea.

Her political goal is to build after-school study rooms for children from multicultural homes. “I will not let married immigrants down,” she pledged to the press after the election.

Lee is the vice chairwoman of the Married Immigrants’ Network, as well as head of the Mongolian branch at the Seoul immigration office.

She has also volunteered at a support group for married immigrants in Seongnam run by Shingu University, where Lee began studying industrial design in 2009.