More of a loss for GNP than a win for opposition

More of a loss for GNP than a win for opposition 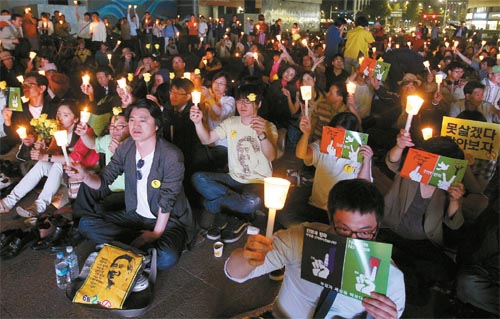 Supporters for Han Myeong-sook held a candlelight vigil from Wednesday night into the early morning yesterday in front of Seoul City Hall. [YONHAP]

Korean voters delivered a stinging rebuke to President Lee Myung-bak and his ruling party in local elections for what they perceived as his government high-handedness, analysts said, in pushing through unwanted infrastructure and development projects and raising excessive tensions over the Cheonan sinking.

“The people’s feeling of repulsion toward the administration’s unilateral pushing of its policies was manifested,” Kang Won-taek, professor of political science at Soongsil University, said. “President Lee must change his governance style.”

Polls taken last week predicted a Grand National Party landslide, and Lee’s approval rating reached over 50 percent shortly before the elections, largely because of his performance in guiding the economy out of recession and calm handling of the sinking of a South Korean warship in March, which he has blamed on North Korea. But analysts are calling the elections a defeat for Lee and his administration’s domestic agenda and governing style.

“The Democrats did well only because the elections were a midterm evaluation for Lee,” said Song Ho-keun, a Seoul National University sociology professor. “The people became skeptical about the government and the ruling party’s ability to communicate with the public during the candlelight vigils against Lee’s decision to reopen the market to U.S. beef imports in 2006. The voters apparently saw no improvement, turning against the Grand Nationals.”

In its campaign against the GNP, which controlled the central government, legislature and most regional governments, the opposition Democratic Party argued that the elections should be used to create checks and balances on the ruling party’s power.

“This outcome was an expression of the public seeking a return to balance,” said Kim Ho-ki, sociology professor at Yonsei University. The liberals have fared badly in local, presidential and legislative elections since 2006, and people have gotten weary of GNP dominance, Kim said.

The outcome also indicates a change in voting behavior when tension with North Korea is high, which in the past boosted support for the conservative GNP.

“Concerns grew about a war, and although North Korea was the culprit, Lee’s stern response actually backfired,” Chung said.

According to the National Election Commission, the turnout was 54.5 percent, the highest ever in the history of local elections. Young voters, increasingly irritated by the GNP’s campaign, which emphasized the security crisis, largely cast ballots against it, analysts say.

But political observers said the unexpected defeat of a slew of ruling party candidates was not a clear rejection of Lee’s handling of North Korea except among the young voters, whose support helped opposition candidates win.

Another key factor behind the GNP’s defeat was the return of liberal politicians who had close ties with the late former President Roh Moo-hyun. The pro-Roh candidates scored victories in many key races, even those that were traditionally strongholds of the conservatives.

The liberal opposition’s strategy of forming electoral alliances and fielding single candidates against the GNP was also proven effective. They didn’t succeed in doing that in Seoul, however, fielding two liberal candidates, resulting in the Democratic Party’s Han Myeong-sook losing to the GNP’s Oh Se-hoon by a margin of 26,412 votes.

The unexpected defeat of a slew of ruling party candidates Wednesday was not, however, a referendum on Lee’s handling of North Korea at a time of escalated tensions, analysts said. Korean voters have started considering that issue above politics, particularly young voters, whose support helped opposition candidates win.