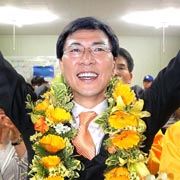 Close associates of the late President Roh Moo-hyun - including some from the so-called “386 generation” of politicians born during the 1960s and active in the 1980s democracy movement - made an unexpectedly strong comeback on Wednesday, bringing back the Roh effect that influenced the 2002 presidential race and 2004 legislative election.

The successes of An and Lee, in particular, are credited to sentiment for the late president, as both have faced investigation - and An has been convicted - for political misconduct.

For An, Wednesday’s vote marks both redemption and the first time in a 21-year political career that he has been elected to public office. A student activist at Korea University, he first went to work for Kim Deog-ryong, a former Grand National Party floor leader and currently the special presidential aide for public unity. 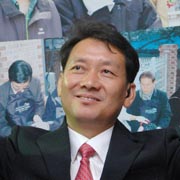 An became a political partner of Roh after they met in 1994, and in 2000 began working in his primary election camp for the 2002 presidential race.

However, he was never appointed to an office during Roh’s five years in the Blue House. In 2004 he was arrested for illegally soliciting presidential campaign funds and spent one year in prison after he was convicted of the charge; that conviction kept his name out of the legislative election in 2008.

All seems forgiven now. Watching the vote counts on Wednesday night, Ahn said, “I believe the people of South Chungcheong have cast their vote for new change.”

Gangwon’s governor-elect Lee is another 386-er who had an exceptionally close relationship with the late president. After graduating from Yonsei University, he was secretary to the late president while Roh was a legislator. Lee later worked in Roh’s presidential election camp as well as at the Blue House before becoming a legislator himself in 2004, representing Pyeong-chang.

He was re-elected in 2008, but last year announced his retirement from politics after prosecutors opened an investigation into his alleged involvement in “Park Yeon-cha Gate,” an illegal lobbying scam. The case is still under judicial review, but if Lee is found guilty and fined more than 100 million won ($83,000) he will lose his new seat. 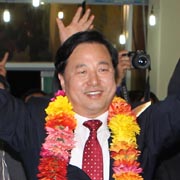 Despite the scandal, Lee received the strong backing of the Democratic Party in his run for the governor’s office. And during the campaign, Lee vowed that he would make Gangwon a political power strong enough to back a planned presidential bid.

Breaking into politics may have been toughest for the third of the trio. Kim ran for governor three times before he was able to shake loose the GNP’s solid hold in South Gyeongsang. He tried in 2002 and 2006, but Democratic support in the region was weak.

Like the other two governor-elects, Kim - nicknamed “Little Roh” because he wanted to break past school ties and regionalism - had a strong relationship with the late president, in whose administration he found his first political berth as home affairs minister.

The Roh effect was also felt in smaller regions, as former associates and followers of the late president claimed victory.

Kim Man-soo, a Blue House spokesman during the Roh administration, was elected mayor of Bucheon, and Yum Tae-young, Suwon’s mayor-elect, was an environmental secretary under Roh. In addition, Min Hyung-bae, the new district head of Gwangsan in Gwangju, and Bok Ki-wang, the mayor-elect of Asan, South Chung-cheong, were both Roh’s men.