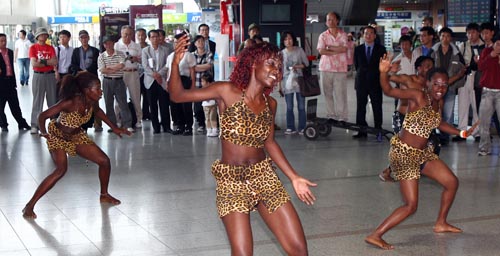 South African dancers perform at Seoul Station yesterday at a celebration held by the South African Embassy ahead of the World Cup. By Jung Kang-hyun

The South African Embassy held a string of shows in downtown Seoul yesterday to mark the start of the 2010 South Africa World Cup.

“The regional elections were yesterday ... I hope that the attention goes completely toward the World Cup now,” Hilton Anthony Dennis, the South African ambassador to Korea, said as the event kicked off in a flurry of multicolored garb.

A troupe of African singers, dancers and drummers made their way from Seoul Station through the city, rendering bystanders speechless.

“Seeing this sort of performance in the heart of the city is very exciting, and it seems to bring the World Cup closer to me,” said bystander Lee Sang-hoon. “It’s definitely not something you see here every day,” he added, before one performer pulled him in to dance.

Making the show harder to ignore were the notorious vuvuzela horns, which Dennis warned, are “very loud at first, but you will get used to them.”

Vuvuzelas will be making a lot of noise on June 12 for Korea’s first group phase match against Greece, which begins at 8:30 p.m. Korean time.