G-20 to focus on development gap

G-20 to focus on development gap 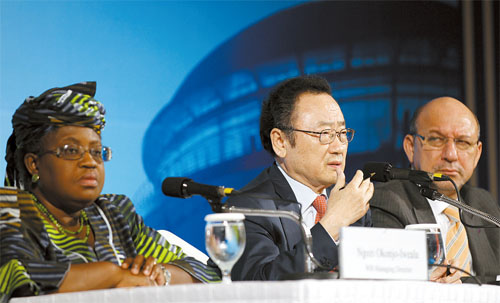 From left: Ngozi Okonjo-Iweala, World Bank managing director; Sakong Il, chairman of the presidential committee for the G-20 Summit; and Trevor Manuel, minister in the Presidency of South Africa’s National Planning Commission, at a press conference during the G-20 meeting of financial ministers and central bank governors in Busan. [YONHAP]

BUSAN - Seoul is seeking to highlight efforts to bridge the development gap between rich and poor countries at the November G-20 Summit in the Korean capital to make the group of leading economic powers more relevant to the rest of the world.

Sakong Il, chairman of the presidential committee for the G-20 Summit, said yesterday development should be a “priority agenda” item for the Seoul summit, as he addressed a forum held during the G-20 meeting of finance ministers and central bank governors being held this weekend in Busan.

“At the Pittsburgh summit last September, the G-20 leaders agreed that to give the G-20 more legitimacy and credibility, it is necessary to get support from the 172 United Nations member countries outside of the G-20,” said Sakong during the Korea-World Bank High Level Conference on Post-Crisis Growth and Development.

“And the development issue is obviously a policy priority and major concern of the 172 countries since they mostly belong to the developing and emerging world ... so we definitely need input from global experts, multinational agencies and development-related institutions at this conference.”

At the conference policy makers and developmental experts gave proposals on how to narrow the developmental gap, tackle global food security and reform trade policies to accelerate growth in developing nations.

Seoul economic officials view the November G-20 Summit in Seoul as a rare opportunity to showcase Korea’s ability to lead debates among the world’s leading economic powers. The successful hosting of the Seoul summit has been the biggest obsession among government officials this year. But the issue of tackling the development issues has taken a backseat to more pressing immediate issues, including problems in the global financial system, international regulatory reforms and exiting from stimulus programs.

Ngozi Okonjo-Iweala, the World Bank managing director and a panelist at yesterday’s forum, stressed discussing developmental issues will be “very important for the credibility of the G-20 to the rest of the world.”

She said emerging countries will play a bigger role in pulling the global economy out of recession, stressing that demand from a growing middle class in Africa, which will soon reach a billion people, will help replace shrinking demand from consumers in developed economies.

“We will provide important sources of demand for goods and services from developed nations,” said the former Nigerian finance minister.