His refuge from disease was Jeju’s beauty

His refuge from disease was Jeju’s beauty

Kim was fascinated by the storms and violent weather that frequently buffet Jeju’s shores, as this photograph by him reflects. Provided by Dumoak

But even today, Kim is remembered as an artist - a photographer who wandered alone through the hills of Jeju Island, in search of beautiful subjects.

In his last few years on earth, Kim transformed a shuttered school on Jeju into a photo gallery and wrote a book of essays. The gallery, Dumoak, is still open, and has now become a tourist attraction.

Dumoak is actually the old name of Mount Halla, South Korea’s highest mountain, located on the island. Kim rented out the site in the village of Samdal-ri, Seongsan-eup, just after his diagnosis in 2001.

It was a grand project, but he couldn’t see it through to completion. When he died in 2005, it was left to his dear friend Park Hun-il, 41, whom he had taught photography, to realize Kim’s dream. Today, Park continues to run the gallery. 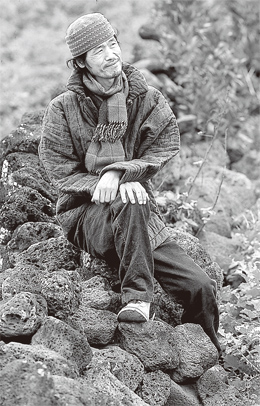 This photo shows Kim Young-gap in winter 2003. He died of Lou Gehrig’s disease one and a half years later. By Kwen Hyek-jae

Dumoak could better be called a complex than a simple gallery. It stretches over 13 square kilometers (140 million square feet) of land and it displays about 100 of Kim’s works out of a collection of around 200,000. The atrium - once a playground - has been transformed to look like one of the mountainous regions where Kim would hike. According to Park, about 70,000 people visited the gallery last year.

Contributing to its popularity, three “olle” trail routes pass Dumoak. In Jeju dialect, the word olle refers to the narrow paths that would connect the street to the front gate of the house. Today, it refers to the island’s network of hiking routes, which attracts an increasing number of visitors.

“Among all the olle routes, which stretch 300 kilometers in total, those that pass Dumoak are the only ones that require a toll to use,” said Seo Myeong-suk, the chief director of the Jeju Olle Corporation-Foundation.

Yet crowds still come, to see the natural beauty of the place and the legacy left behind by one of its most ardent devotees.

This photo shows a small oreum near a bigger one called Darangsi, which means squirrel in the Jeju dialect. It was one of Kim’s favorite subjects. By Kwen Hyek-jae

A persimmon tree that was once struck by lightning stands about 5 meters to the left of the main gate of Dumoak. Kim’s body was cremated, and the ashes scattered beneath this tree. Visitors and friends who cherish the memory of Kim still light cigarettes and leave them there as offerings.

Kim’s artistic world can be divided largely into two periods. In the early days, the photographer focused on Jeju’s cultural heritage, including its diving fisherwomen and gut exorcisms. In the 1990s, however, Kim began to be drawn toward the natural landscape. The first place to catch his eye was Mara Island, just south of Jeju. Next he chronicled the sea surrounding the island - but Kim wasn’t interested in the calm blue waters most tourists are greeted with. What intrigued him were the storms that assault the island, bringing rain, snow, wind and sleet.

The uniquely shaped hills of Jeju, called “oreum” in the local dialect, were also an object of interest for Kim. He particularly loved Yongnuni Oreum, so named because it resembles the shape of a dragon laying down. Kim’s friends said what caught his attention was the fact that the oreum looked so completely different depending on one’s point of view. 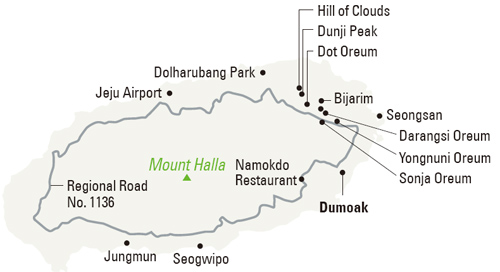 Yongnuni Oreum has now become one of the most popular for hikers.

The exhibit currently taking place at Dumoak includes a number of photos of pine trees standing on both sides of a low hill. That geographical feature is known as the “Hill of Clouds,” and is located about eight kilometers from Yongnuni Oreum. Darangsi and Sonja Oreum, all clustered in the mountainous regions in the eastern part of Jeju, also recur in Kim’s works.


A legacy of friendships

To commemorate the beloved photographer, on the fifth anniversary of his death, May 29, a “gallery concert” was held in the courtyard of Dumoak, at which the soprano Park Hyun-ju and tenor Hyun Haeng-bok joined the Jeju Provincial Symphony Orchestra.

At the same event a new song called, “Mr. Kim Young-gap,” with music by Kim In-gap and words by Yang In-ja, sung by Lee Mun-seok, was performed for the first time.

Two books about the artist have also been published. The first, simply titled, “Kim Young-gap,” was written together by 20 people who still remember him. It contains 69 previously unpublished photographs by Kim, as well as stories about Kim and Dumoak told by Kim’s friends, including the poet Lee Saeng-jin, songwriter Yang In-ja, attorney Cha Byung-jik and singer Lee Dong-won. 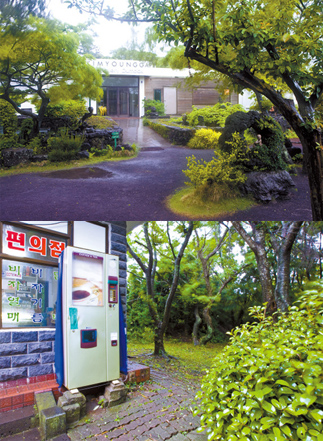 Top: Kim called the cups of instant coffee from this vending machine at the entrance to Bijarim forest on Jeju the “best coffee in the world.” Above: The front gate to Dumoak, the gallery Kim Young-gap founded. By Kwen Hyek-jae

Proceeds from the sale of the book are being donated to the gallery.

The other book, titled “Love in the Woods,” is a book of illustrated poems, using Kim’s photos as a setting for poems written by Lee Saeng-jin. It is a revised edition of a book originally published in 1997. The photos featured in the book will be on display at Dumoak until June 29.

Kim has left his mark on both people and places on the island. He used to stop for a cup of instant coffee at a particular vending machine near the entrance to the Bijarim woods. The photographer called it “the best coffee in the world,” though that of course probably had as much to do with the incredible surroundings as with the taste. The vending machine is still there, at a convenience store at the trailhead.

Elsewhere, in Bukchon-ri, Jocheon-eup, is Dolharbang Park, which features harubang, or “stone grandfathers,” the statues made of igneous rock from Jeju’s volcanic past. The park was established in 2005 by Kim Nam-
heung, 43, also a friend of the late artist.

In fact, a number of stone sculptures found in the garden at Dumoak were made by Kim Nam-heung. The harubang pieces in his own park are considered some of the best representations of harubang in the region and the country.

“Kim, who worked so hard despite his disease to establish the gallery, was an inspiration for me to found this,” Kim Nam-heung recalled.

They say the best way to get to know a person is to ask his friends. If the same is true of places, then Jeju tourists owe it to themselves to learn about Kim Young-gap, surely one of Jeju’s most faithful friends.